Legends of the Multi Universe Wiki
Register
Don't have an account?
Sign In
Advertisement
in: Characters, Heroes, Characters that hail from the Power Rangers universe,
and 29 more

Zayto is a character from Power Rangers Dino Fury.

He is portrayed by Russell Curry.

Zayto is an alien warrior from the planet Rafkon. More than 65,000,000 years ago, Rafkon was attacked by the Sporix, alien beasts that know nothing but destruction. Zayto lead the Knights of Rafkon to try and repel the attacking Sporix monsters, but the Sporix proven too powerful and Rafkon was laid to waste. Zayto and the remaining knights fled Rafkon and tracked the Sporix to Earth. Zayto and the remaining knights fought alongside the dinosaurs to try and defeat the Sporix. Unfortunately, the Sporix had gotten stronger than before, gaining the ability to grow giant, forcing the knights and their dinosaur companions to retreat.

During the fierce battle, the knights and their dinosaurs received a visit from the Morphing Masters, who transformed them into the ancient Dino Fury Rangers and created their weapons and Zords. Zayto would eventually meet a wise Solonosaurus known as Solon. The ancient Dino Fury Rangers managed to seal the Sporix away, but five of them would perish in the battle. Only Zayto and Solon survived, with Solon being injured and was forced to be augmented with cybernetic enhancements. Zayto would be placed into stasis for more than 65 million years, therefor, along with Solon, surviving the asteroid strike that wiped out the entire dinosaur population.

Zayto would be reawakened by Solon millions of years later when Void Knight attacked his chamber. He would then meet his newest Ranger teammates, Ollie and Amelia. As a being from Rafkon, Zayto can read minds and can retract his antennae to blend in with the Earth population. 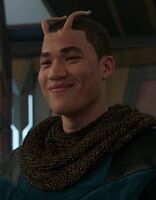