Legends of the Multi Universe Wiki
Register
Don't have an account?
Sign In
Advertisement
in: Characters, Heroes, Characters hailing from the Kingdom Hearts Universe,
and 47 more

Yuna is a playable character in Final Fantasy X, and its sequel, Final Fantasy X-2. She is the daughter of high summoner Braska and an unnamed Al Bhed woman, who died when Sin (Final Fantasy) attacked her ship at sea. Yuna's mother was the sister of the Al Bhed leader Cid, who is Yuna's uncle and the father of Rikku and Brother, Yuna's cousins.

In Final Fantasy X, Yuna becomes a summoner like her father before her, and embarks on a pilgrimage to expel Sin. She meets Tidus who teaches her there is more to life than sacrifice.

In Final Fantasy X-2, Yuna is a sphere hunter on a personal quest to uncover the mystery behind a movie sphere, and becomes involved in rising political tensions and an ancient force that threaten to end Spira's Eternal Calm.

She is voiced by Hedy Burress.

Yuna as a summoner

Yuna as she appears in Kingdom Hearts 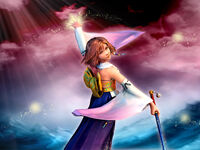 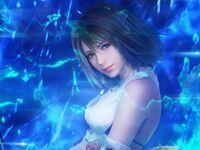 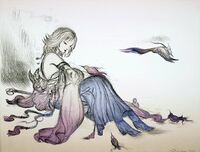 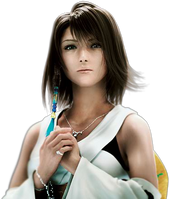 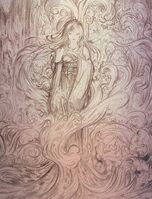