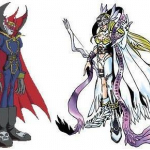 Hi! I'm menslady125. You can also find me going by this name on Youtube.

Although I am indeed the creator of "Legends of the Multi-Universe", the original idea of the "multi-universe" was thought up by The4everreival, so I have him to thank for giving me something for a title. I wrote my story to raise awareness that Disney is not the wonderful thing it used to be, and it needs to come back.

I like: Bible reading, church, making videos, video games, singing, acting, anime, cosplaying, and fame and fortune (still have to work on getting them...although I'm quite famous on Youtube for my series).

I don't like: sin, war, destruction, tyranny, trains, being lonely

TV shows I like are: Disney shows, Teenage Mutant Ninja Turtles, Muppet Babies, Garfield and Friends, He-man and the Masters of the Universe, Transformers (all series), Cops, Pokemon, Digimon, The Fairly Odd Parents, Dragonball, Dragonball Z, Dragonball GT, The Powerpuff Girls, 1000 Ways to Die (not to get a kick out of watching someone die, but because I see this show as a great opportunity to gain knowledge of the dangers that are out there. If you watch it, PLEASE take what you see on it to heart...you'll live longer! And PLEASE pass on what you learn to others. You may save someone's life.)

Books I like are: the Christian Bible, anything by J.R.R Tolkein, anything about mythology

Retrieved from "https://legendsofthemultiuniverse.fandom.com/wiki/User:Menslady125?oldid=697733"
Community content is available under CC-BY-SA unless otherwise noted.