Legends of the Multi Universe Wiki
Register
Don't have an account?
Sign In
Advertisement
in: Characters, Heroes, Сharacters hailing from the Kagerou Project Universe,
and 19 more

Tsubomi Kido is the first member of the Mekakushi Dan and currently its leader.

Kido is a tomboyish looking girl who wears a dark and pale purple-gray hoodie with a headphone design on the hood and an iPod button design on the front. Underneath she wears a red jacket styled with a high zip collar. Along with this, Kido wears green pants and mint green converse shoes. The inside of the pants is white and the left side of her pants is rolled up to her knee. Kido has long, dark green hair reaching down to her hips with two strands laying on her chest on the front, and black eyes. In Mekakucity Actors her hoodie is completely purple, and she has her hair in a ponytail while wearing the hoodie.

Kido grew up in the same orphanage as Seto and Kano. She is always listening to music through her earphones. Although she is naturally kind and has the most common sense within the group, she is short-tempered and has difficulty keeping other members (especially Kano and Seto) in line. She often appears scary at first glance, due to her dark expression and "glare-like gaze," as stated by Kano. In her past, she was relatively normal, but because of her ability, her presence was weak and people often unintentionally ignored her. Over time, she started to become arrogant, developing "chuunibyou" ("8th grader syndrome").

Tsubomi Kido made a first appearance as one of Marika Kato's followers in Mars. She went on a practice training with Milinda Brantini and her friends as well.

After the deaths of Kain and Thornheart, he and the heroes continued to live a life with his friends in Mars. Suddenly, she and the people were visited by the Symphogear heroines and their friends for the first time. During the meeting, she and the gang decided to discuss about the future deaths of Rustal Elion and the rest of Lord Prozen's minions as well.

After the meeting was finished, Tsubomi and the heroes left their homeplanet Mars, thus leaving their families and their homes behind. While continuing to escort Futaba Ichinose, Norimichi Shimada and Chitose Karasuma, she and his friends were confronted by the people of the Knights of Gjallarhorn. However, he and the heroes managed to trick them by sending Flint Lockwood and Steve to KOG. Then, he and the heroes met the Transylvanian Business for the first time.

After the defeat of the Bruters and the death of Yan Baihu, she and the heroes continued their journey to earth. 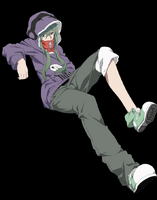