Legends of the Multi Universe Wiki
Register
Don't have an account?
Sign In
Advertisement
in: Characters hated by Darthnecrozma666, Characters hailing from the House of the Dead Universe, Humans,
and 28 more

Thornheart, also known as the Mystery Man by fans, is a mysterious man and one of the main antagonists of the House of the Dead series. He is a business suit who walks with a noticeable limp.

While appearing to be set up as the next main antagonist of the House of the Dead series, his identity and intentions remain unknown.

Little is known about the Mystery Man's identity and motives. While fan theories have materialized, all are unconfirmed and many were debunked.

One of Gjallarhorn's Mobile Suit pilot, he was among the three Graze pilots sent to attack Chryse Guard Security's base. He retreated from the battle afterwards when one of the members, Milinda Brantini piloted ASW-G-08 Gundam Barbatos and defeated one Graze and damaged another, followed by the fact that his resistance were children.

Refusing to follow Gjallarhorn's orders to cleanse evidences of their defeat, Thornheart challenged Milinda in a Mobile Suit battle and demanded Futaba Ichinose as his winning prize. After being defeated, he requested Milinda to end his life and the latter does so by firing at him with a handgun.

Thornhart is known by the nickname "Pilate".Zephyr finally seizes an opportunity to kill Thornheart. 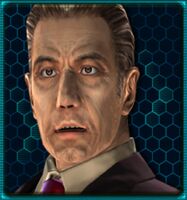 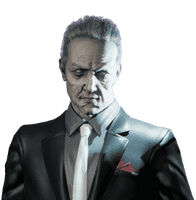