He had a rivalry with AVGN as well

Legends of The Multi-Universe

With all of his teammates dead and a war going on, it seems to the Nostalgia Critic that he would rather be reviewing poorly made movies and TV shows than being the only survivor (or so he thought) from his group and fighting against otherworldly evil forces. So he is willing to do whatever he can to protect the Angels of Disney and get his friends back so that the enemies can be put in their places.

Legends Of Light and Darkness

After the battle with Galvatron and his cronies, Nostalgia Critic disappeared and was kidnapped by Malefor and his cronies. Seeing the use for him, they brainwashed him into becoming N. Bison and used him to destroy TGWTG Universe. He often worked with Transformer Human scumbag Silas. He however was brought back to his senses by Axel, the Nostalgia Chick and Angry Video Game Nerd. Nostalgia Critic chases Giovanni and Fire Lord Ozai with his hatred of bat credit cards that Slade uses on them.

He and Angry Video Game Nerd try to extort info out of Jackal and Hyena and not to lie. Nostalgia Critic is told a lot of what went on and he presumably tells Slade, Bender and the others about the information of the second season with Dib and Bubbles. Nostalgia Critic is seen with the others regarding Malefor and his destroyer plan which he informs to Klonoa must be real since Klonoa didn't believe it existed. Nostalgia Critic overhears the tales of Hunson from his new friends and asks them if it was Galvatron or Wesker like only to learn it was his own style.

Nostalgia Critic, hearing about the element bombs, states it makes no sense whatsoever unless he was an anime reviewer or comic reviewer. He chases Charles Logan with the team and flips out during the chase with the team which Nerd tries to calm him down. Critic congratulates Isabella on her plan as they get to the area to Logan as he admits how smart it was. He gets shocked with Joker's backstabbing on Addler and decides to take him down. Nostalgia Critic is assigned to be the obtainer of Model Z, which he does under the guide of AVGN, Phantom R, Marie, Harpuia and Makoto. After this they set off to the Mountain of Malefor.

Nostalgia Critic lands on Apolopis and fights his way through Darkseid`s minions beating them until he is outmatched bad by MissingNO. Fortunately Linkara manages to save the team. He becomes the 12 heroes of The B Team to fight Malefor and they fight him and Khan in a tedious battle alongside Hiccup and Slade's team. Nostalgia Critic works with the others for the wedding and notices shooting stars without realizing it's parts of Olympicus. 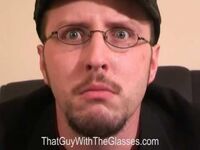 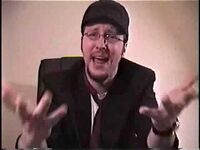 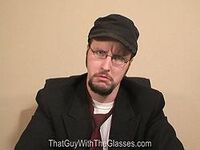 Oh, Falkor, what have they done to you?!

You know, for kids! 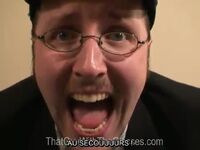 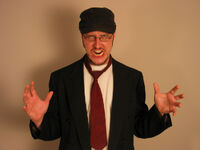 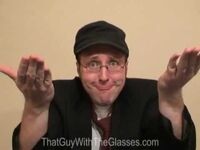 How you would NOT want to see he Nostagia Critic standing in front of you! 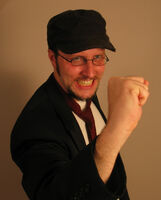 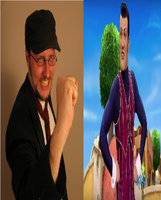 "The Nostalgia Critic and Robbie Rotten"
Add a photo to this gallery
Retrieved from "https://legendsofthemultiuniverse.fandom.com/wiki/The_Nostalgia_Critic?oldid=734000"
Community content is available under CC-BY-SA unless otherwise noted.