Legends of the Multi Universe Wiki
Register
Don't have an account?
Sign In
Advertisement
in: Characters, Villains, Humans,
and 39 more

Thaddeus Valentine is a historian in London and an important character in the first book of the Mortal Engines Quartet.

Thaddeus Valentine made a debut as one of the members of the Knights of Gjallarhorn led by Gunther Prozen. After the three members of Gjallarhorn were killed by the hands of Milinda Brantini, Thaddeus becomes frustrated, along with his friends. However, he was visited by the mysterious arrival of the Time Jackers for the first time. So, he and the rest of the Gunther Prozen's followers are working together to set up their plans in order to kidnap Futaba Ichinose and Chitose Karasuma by any means possible.

After the Bruters were defeated, he and the rest of many villains attended the speech ceremony done by Gunther Prozen. He and the villains can be prepared to kill Yuinshiel Asteria and her heroic followers. So that, they'll be prepared to spread evil throughout the multi-universe. He and the villains were attack by the mysterious black woman named Ranko Kanzaki. He, the Time Jackers, Celestial Sphere, and the Seven Stars tried their bests to defeat her, but only to be backfired. He and the villains can realize the mistakes. So that, they can try again to be trained. Thaddeus and the remaining forces of KOG attacked and ambushed the heroes; but, he and the villains were backedfired. One week later, he made an alliance with The Coachman, J. Worthington Foulfellow, Gideon (Pinocchio), and many villains. Together, they work to rage war against the army heroes led by their respective leaders. Suddenly, Thaddeus Valentine could only watch in horror as London's slowing tracks run over his ship with him still inside it, thus crushing Thaddeus Valentine to death, along J Worthington Foulfellow and Gideon. 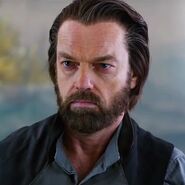 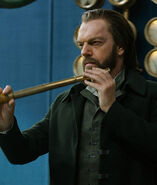