Legends of the Multi Universe Wiki
Register
Don't have an account?
Sign In
Advertisement
in: Supporting Characters, Characters, Anti Heroes,
and 16 more

Kiba is a member of the Hokuto Three Crows and a supporting protagonist in Kamen Rider Build. He originally took part in the Hokuto invasion of Touto but later defected to Team Build along with his boss Kazumi Sawatari after Seito occupied Hokuto.

Syoukichi Mihara was the most childish of the Hokuto Sanbagarasu, speaking in a goofy manner and making whimsical observations. He was often seen squatting. Apparently, he also possessed a keen sense of smell. 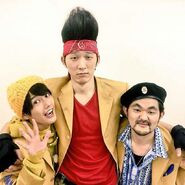