Legends of the Multi Universe Wiki
Register
Don't have an account?
Sign In
Advertisement
in: Characters, Humans, Heroes,
and 17 more

Spider-Woman (Gwen Stacy; colloquial: "Spider-Gwen", "White Widow"or "Ghost Spider") is a fictional superhero in comic books published by Marvel Comics. She was created by Jason Latour and Robbi Rodriguez. The character debuted in Edge of Spider-Verse #2 as part of the 2014–15 "Spider-Verse" comic book storyline, leading to the ongoing series Spider-Gwen that commenced in 2015.

Spider-Woman is a variant of Spider-Man and an alternate-universe versionof Gwen Stacy. She resides in what Marvel dubs Earth-65, where Gwen Stacy is bitten by a radioactive spider and becomes a superheroine instead of Peter Parker becoming Spider-Man. The character also has to deal with various enemies, including Earth-65 versions of Matt Murdock and Frank Castle. Gwen Stacy's Spider-Woman is depicted as harboring much of Peter's personality and conflicts along with sharing his powers and abilities. 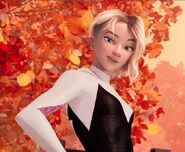 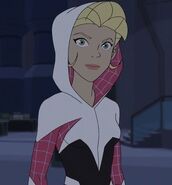 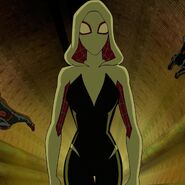