Start a Wiki
Sonia Nevermind (ソニア・ネヴァーマインド Sonia Nebāmaindo) is one of the characters featured in Danganronpa 2: Goodbye Despair and a participant in the Killing School Trip.

Sonia has the title Ultimate Princess (超高校級の「王女」chō kōkō kyū no “ōjo.” lit. Super High School Level Princess). She is the princess of Kingdom of Novoselic, which is a small European monarchy.

At the end of Danganronpa 2, Sonia and the other survivors managed to escape to the real world and remained in Jabberwock Island.

Sonia returns in Danganronpa 3: The End of Hope's Peak Academy as a student in Class 77-B enrolled in Hope's Peak Academy with the other Remnants of Despair. Sonia was succumbed to despair along with her classmates after being brainwashed by Junko Enoshima and became a part of Ultimate Despair.

Sonia also appears in a light novel titled Danganronpa: Togami as one of the antagonists. Her illusory version appeared in the OVA titled Super Danganronpa 2.5: Nagito Komaeda and the Destroyer of the World.

At the end of Danganronpa 3, Sonia and all of her awakens classmates set off to stop Ryota Mitarai from using his hope brainwashing video. Sonia and her classmates decided to atone for their sins as the former members of Ultimate Despair

Though they were already shown to speak to one another before, Sonia and Gundham's friendship truly blooms during Chapter 4 after they finished the Roller Coaster ride and Sonia asked to accompany Gundham on a trip to an amusement park in hell. They became very close due to their complimenting interests (such as Sonia's interest in the occult with his odd behavior, or her liking of his "cute hamsters"). Sonia showed interest in Gundham's hamsters multiple times, which successfully flustered Gundham and made him blush.

She constantly sides with Gundham, even going off with him to explore the Fun House before Kazuichi noticed. In the main story, Sonia is also the only one who has made Gundham blush. It's implied that they have a romantic interest in each other, much to Kazuichi's annoyance.

Sonia is also the only one that Gundham does not refer to as kisama (a way of saying 'you' that suggests contempt, or alternatively an archaic polite form of 'you') or by their last name, instead calling her "she-cat" at one point or "the Dark Queen", which is mentioned to be his fantasized version of Sonia. He claims that the Dark Queen has great power, which has not been awakened yet.

When Gundham is deemed the culprit of Chapter 4, Sonia refuses to believe it, urging him to object against Hajime's accusations. Gundham did defend himself but was unusually silent, and Sonia begged him to say something many times. She also pleaded with Monokuma to save Gundham from his execution, but finally let Gundham go after she was convinced by Gundham himself. He told her actions were "unbecoming of someone of your status".

Gundham's Four Dark Devas of Destruction are entrusted into Sonia's care after his "death". After Gundham's execution, Sonia has a new resolve to make it out alive without anymore killings because of his last words about not giving up.

During their time at Hope's Peak Academy, Sonia latched onto Gundham's eccentric personality when Chisa left and the two bonded. Sonia enjoys the occult and she appears to like the Four Dark Devas, calling them cute. She is shocked when Gundham refers to her as a low ranking demon.

After Gundham returns from his coma and the former Remnants of Despair finish assisting the Future Foundation, Sonia is seen eagerly talking to Gundham on the ship, admiring his hamsters.

In Danganronpa V3 bonus mode, Gundham thinks that Sonia is preforming a demon ritual but she tells him that is simply cleaning. Sonia tells Gundham that she couldn't hang out with her friends in her old country like this.

Sonia admires Chiaki greatly, both as her classmate and the class representative. Sonia was very close to her as shown in the despair arc of Danganronpa 3. She always hugged and complimented her when Chiaki was talking. Sonia was impressed with Chiaki's effort to unite her classmates using her games that she brought and holding Chisa's welcome back party. Sonia, like the rest of her class, cried when they watched Chiaki slowly being tortured to death.

Chiaki was one of Sonia's closest friends during the Killing School Trip. In Chapter 2, Sonia invited Chiaki to her beach party, which she attended, although it was cut short due to Mahiru's murder. In Chapter 5, Sonia furiously defends Chiaki when she is accused of being the traitor, even going as far as to try to push suspicion onto herself. When Chiaki is voted as the culprit, Sonia tearfully tells her that she doesn't think Chiaki could ever betray them, and says that no matter what, they'll always be friends, which Chiaki agrees to.

Kazuichi has had a liking for Sonia since their times in Hope's Peak Academy. Kazuichi always supports Sonia's claims and defends her from any contradictions. Although Kazuichi shows a lot of interest in her, Sonia makes it very clear that she is far from interested and when talking to Hajime she refers to him as her stalker. She also is much more hostile towards Kazuichi than she is towards any other student. However, after escaping Jabberwock Island to assist the Future Foundation, Sonia smiles at and praises Kazuichi for successfully destroying an army of Monokumas, showing that she now thinks of him as a friend and is at least making an attempt to be nicer to him. This is further shown when she appears to be waiting for Kazuichi to board the boat that will take them to the Future Foundation's Headquarters.

Hiyoko is one of the people that Sonia tends to trust and invites in some events. Sonia even shows concern towards Hiyoko as when Hiyoko struggles putting on her kimono in Chapter 3. Sonia was devastated how Hiyoko, Ibuki, and Mikan are dead since they all died in the same case and states how she remembers Hiyoko dance while mourning for Mahiru. In turn, Hiyoko states to Hajime that she feels irritated how some are over-pampering Sonia like crazy including Kaizuichi. Hajime states that Hiyoko might have been jealous which Hiyoko denies and holds hatred towards Sonia in Hiyoko's last Free Time Events.

Sonia had taken a liking to Hajime over the course of the Killing School Trip, to the point she thought he was a hero from prophecy that would bring happiness to her land and wanted him to rule the Kingdom of Novoselic together after they escaped from the island.

Sonia learns about Donnie's crush when she sees him writing a love confession letter. She helps him by telling him that if he loves April he should be himself. She believes that girls loves a guy who is completely honest and doesn't change who he is to impress her.

As the Ultimate Princess, Sonia is fast friends with all the princesses including Peach. She and Peach like to eat cake together in Princess Peach's castle in the Mushroom Kingdom.

Sonia is friends with April and they hang out at the cafe to talk about everything. She helps April of being a proper lady during important social events because of her tomboyish personality.

Sonia encourages Amy to get Sonic because she believes they are destined to be together for all eternity.

Sonia believes Casey has a lot of potential as a fighter. She hangs out with him at the ice rink to see him practice hockey.

"Casey Jones, you need to be more careful. This area has a lot of surprises so we must keep our guard up at all costs." - Sonia warning Casey

"(chuckles) April, you are quite an amazing young lady to go through that much danger while living a normal live in New York. You should take me there too." - Sonia after hearing April's adventures in New York

"A talking turtle that walks like a human? Fascinating. Please tell me your name." - Sonia's reaction when meeting the Turtles for the first time

"Go get him, Amy Rose! I'm rooting for you!" - Sonia cheering Amy on as she is running after Sonic

"Donnie, you don't have to be a human to get April. A girl loves a guy who is completely honest. She loves you just the way you are." - Sonia giving advice to Donnie

"Raphael, that was too reckless! You could've gotten yourself killed! Please don't do that again!" - Sonia scolding Raph for his recklessness during a mission

"April, may I ask you something? What do you think about Donatello? And don't be afraid to give us the details. I need to know your relationship with him." - Sonia asking April about Donnie

"Amazing job! You have such potential. If you are an Ultimate student, I believe you should have the title of the Ultimate Hockey Player!" - Sonia praising Casey Jones

"I love the dress, Rarity! It has the feeling of true royalty." - Sonia seeing Rarity's new dress she made

"Ladybug is so amazing! I wish I could see her in person and get an exclusive interview! That would be my ultimate dream!" - Sonia admiring over Ladybug

"Of course she would! After all, everyone deserves to find love! Even mutants need someone to love with. You are a prince and she is a princess. You need to get that girl or you'll never get the chance to!" - Sonia encouraging Donnie 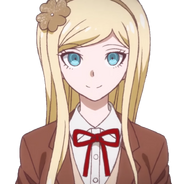 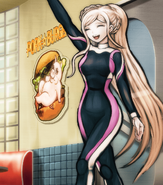 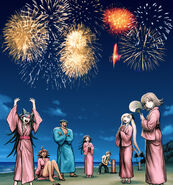 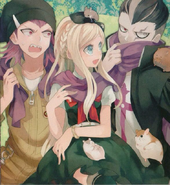 "Sonia Nevermind Gundham Tanaka and Kazuichi Soda"
Add a photo to this gallery
Retrieved from "https://legendsofthemultiuniverse.fandom.com/wiki/Sonia_Nevermind?oldid=720220"
Community content is available under CC-BY-SA unless otherwise noted.