Legends of the Multi Universe Wiki
Register
Don't have an account?
Sign In
Advertisement
in: Characters, Villains, Slade's ensemble,
and 76 more

Sideshow Bob is a funny palm tree hair human villain that hails from the Simpsons universe. He is voiced by Kelsey Grammer.

He was once the sidekick of Krusty the Clown, but he framed him for armed robbery in 1990 so he could run the show. Bart Simpson however exploited his scheme and ever since he has been trying to kill Bart, or do something directed to him. After being foiled the 11th time, He lost hope as a criminal mastermind but it was restored when Slade bailed him out and made the mastermind a deal he couldn't refuse.

Sideshow Bob eventually went on to become one of Slade's main staff alongside Anti Cosmo, Eddy, Celes, Hades, Mojo Jojo and HIM. He is still one of the newest members, and while Hades is a main provider of Slade's armies, Sideshow Bob's notorious as a criminal mastermind has opened up connections for Slade to gather more folowers.

His theme is a parody of the Cape Fear theme in Martin Scorese's Cape Fear of 1991 and in said episode he parodies a great deal of the antagonist Max Cady.

Sideshow Bob was in Slade's Castle as he greeted Slade's returned and wondered why Bender and Hiccup were there, He backed off when he learned they were all working together. Sideshow Bob when questioned about the biometals, he recalls how he met the creator Ciel which Bender and Skipper catch on with. Alongside Slade's other members Sideshow Bob finds the destroyer and they all destroy it

Sideshow Bob is the 6th most senior member of Slade's Ensemble behind Slade, Anti Cosmo, Hades, Mojo Jojo and HIM.

While Sideshow Bob was a member of Slade's team since Slade Strikes Back, He once again joins up with Slade after Blackpool to defeat Eobard Thawne. Put in charge of the musical entertainment Bob relishes in this though it's short lived when he and Mojo both get Phineas and Isabella's letter, find Curveo attacked by the Joker and ultimately invaded by Thawne. He does research on the invasion while the others attack Thawne's crew. Sideshow Bob manages to identify that Toffee is who did this.He along with the other members of Slade's meeting to discuss their attack that Thawne committed on them and his theft of a precious item that Slade and Anti Cosmo claimed in a past adventure.

Sideshow Bob Travels with Slade and his team to 2010 to track Thawne and recruit Eddy and The V Team to help them as well as Slade's past self. Sideshow Bob is also one of the associates who works with Harry and Celes to figure the husks they found upon inspection while Slade is away. He also participates in The Ensemble battle with Deathstroke and his associates who invaded the ship and helps Celes and Mojo Jojo deal with Malcolm Merlyn and Welton.

Sideshow Bob joins Mojo Jojo and the V Team in recruiting The Snarts. When Brother Blood takes control of The V Team, Mojo sends Bob to get Leonard and Lisa back to the team and they helps Julian, Django, Ray Palmer and Nate Heywood stop Dick and escape from Joker's forces.

Anti Cosmo, Tombstone and Sideshow Bob all are seen carrying The V Team as they make their own preparations to get to Slade and Harry Wells.  Anti Cosmo gets in contact with his past self to help out with this and has him travel all over the place to find them. This is When Deathstroke arrives on the scene and reveals that he managed to track them here with every intention of preventing from getting to the others. Sideshow Bob asks how does he know this, because he has eyes and ears everywhere Deathstroke says

Anti Cosmo and Sideshow Bob manage to find the eye of Lady Gobbler and wonder how Deathstroke snuck it on board with such ease. Bob believes that they can turn it on him and the legion though Anti Cosmo believes Deathstroke would catch that, Sideshow Bob states that it wouldn't kill them to try and AC agrees. Tombstone takes the eye and goes after Deathstroke who has defeated the 4 which Bob and Anti Cosmo bring back to get them to health.

While getting back to good condition, Scrouge and Negaduck discuss Deathstroke's frightening efficiency and capability of fighting as well as skill. Sideshow Bob points out that Deathstroke is after all a mercenary and assassin. Eddy then adds that he seems to be no nonsense and jumps right into the plot, He even compares Deathstroke as the bigger threat than Thawne which Anti Cosmo disagrees with.

Return of The Weirdmagedon Cult

Wile E sarcastically tells Hero to do the dead bodies under the red palm tree which Hero does until he hears it talk and Sideshow Bob emerges with what Hero is doing is too much. Hero screams Ahh Sideshow Bob. Sideshow Bob tells Hero that he's not Bart and just call him Bob, Bender asks Sideshow Bob what's he is doing here

Sideshow Bob tells Bender, Wile E and Luci as Hero has his way with the corpses that Slade sent him and Tombstone to get more info on the inner circle members of the cult and that Slade noticed Toffee was heading here so he sent Sideshow Bob to spy on them using his likeness as a palm tree. Sideshow Bob explains that he didn't see Toffee kill the mermaids but he did overhear the prounoncedness of deceased people, Tombstone also arrives and gives Bender a guidebook of who he found in Toffee's cults. Luci decides to check on Bean and Elfo.

Wile E takes the book and analyzes that Toffee has a elite disney plan like Bender suspected and Sideshow Bob adds Harrison thought so too and that Harrison is on his own mission with Slade regarding the pistachios. Bender and Wile E ask Sideshow Bob to call Slade which he does. Bender and WIle E seeing Bean getting her hang over and Hero's necro interset state it's fortunate that Luan and Stan were not here, and Wile E offers to get some dna on the deceased memraids which Bender thinks could work, he wonders why hasn't Marcy contacted him if Marcy may have been there.

Sideshow Bob calls Slade about what he witnessed on Mako Island and that Bender has come across it. Slade tells Bob that he himself is one a mission with Harrison, Celes, Mojo, Insano and Varrick to go to Danville to stop the source of the pistachio tree aliens Harrison found, Slade also brings up that archer girl (Marcy) infromed Harrison of what she saw on the island and he tried to text Luan and Bender, Sideshow Bob tells Slade that Bender didn't get the text until he got on to the island and that the dead bodies are still there and their car is there due to Hero being a drunk wreck.

Anti Cosmo and Naseala arrive at Mako Island and Naseala asks Sideshow Bob where and Bob points to Naseala where and Anti Cosmo asks Bender for Harrison's payment which he gives. Wile E and Bender explain to Anti Cosmo they found themselves most baffling, there were 3 mermaids that Sideshow Bob witnessed and that they were all killed but they only found two around the ocean and wonder where the other one went

Wile E and Elfo offer to help Tombstone and Slade deal with the pistachios in Danville. Sideshow Bob agrees with this and decides to let the group help Slade and Harrison with this. Anti Cosmo tells Sideshow Bob and Tombstone that he won't be coming back as he is going to accompany Bender to Royal Woods and help him investgate the letter and the mermaid. Anti Cosmo also intstructs Naseala to keep up the work and report anything he finds.

Slade, Harrison, Wile E and the rest arrive at Danville and Harrison takes the lead and tells the group to keep an eye out of for the any already pistachios among the people. Wile E uses his tracker of pistachios to track down where they are and Hero and Celes follow them with the Mojo, Elfo, Luci, Bean, Sideshow Bob and Tombstone right behind them.

Harrison, Wile E, Leonard Snart, Sideshow Bob, Captain Hero, Bean, Elfo, Luci, Mojo, Tombstone and Celes  have all been ambushed by the pistachios and are in the middle of their battle with them and despite being outnumbered they're managng to whole their own in part to Celes's magic, Snart's Freeze Gun, Captain Hero's powers and the technology of Mojo Jojo, Wile E and Harrison while Bean is stabbing them with Elfo and Luci.

Bean gets a call from Slade and Slade tells Bean and Snart that Naesala has acquired a blood sample and that he has found who it belongs to. Sideshow Bob and Luci insert themselves in and ask who is it, Insano clarifies it's a mako mermaid known as Cleo Setori and the 4 wonder who is she. Slade states she belongs to the H20 universe and that it was implied that she was killed, but she is still alive somewhere and that Toffee's plan to kill them may have failed.

Sideshow Bob with the rest of Slade's Army minus Slade, Anti Cosmo and Harrison are brought through Royal Woods by the Jolly Roger manned by Captain Hook and they all meet up with Bender, Luan, Marcy and the rest to discuss how to face off with Toffee and Bill Cipher.

As the Vaccines come around by the result of the team, Sideshow Bob due to his immunitys as a result of him being part of Disney goes alongside Bender, Marcy and Hook to wait for the others in another side of Royal Woods to have a drink with Bender and Hook. Sideshow Bob lends a hand to the two in regards to their strategy to go after the two leaders of the cult as well as how to save some of the M.O.D.A.B members that were causalities to be used as a throne for Bill.

Sideshow Bob, Bender, Marcy and Hook are ambushed by Zhan Tiri and are subsequently saved by Anti Cosmo, Hades and HIM. With a plan in mind, Sideshow Bob presents the plan the three of them made to Slade, Harry and Anti Cosmo while Bender tells Snart with Marcy.

Regarding the Newtopiaian invasion, Sideshow Bob does his best to stall the monsters with the rest of Slade's crew to make sure Bender, Marcy, Slade, Anti Cosmo, Harrison and Luan succeed in their mission.

Sideshow Bob fights the rest of the Weirdmagedon Cult's hench maniacs and is ordered to flee from the expolsions that go off in the pyramid. After the pyramid is destoryed and everyone gets to safety. He is honored by Andrias at Newtopia like the other members of Slade's crew as a result. He is seen last playing a violin as the stars and moon shine bright with Anti Cosmo, Jesse Wells, Bender and his friends observing the pretty show 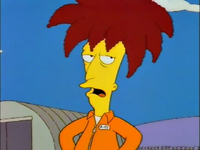 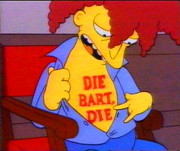 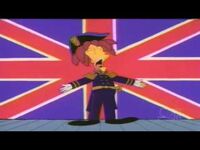 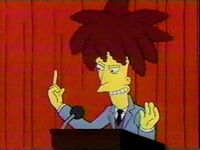 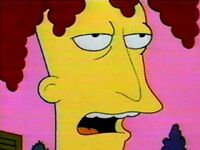 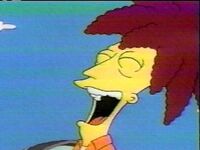 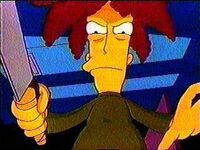 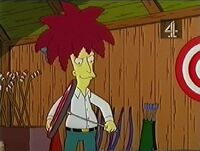 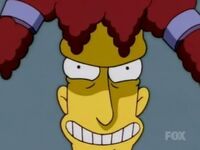 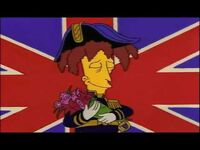 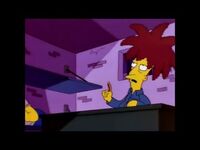 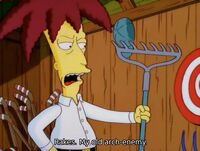 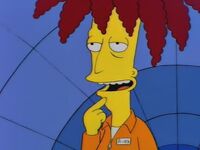 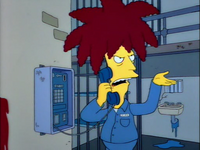 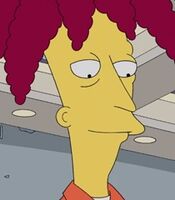 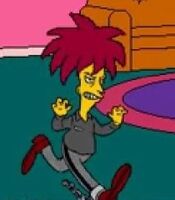 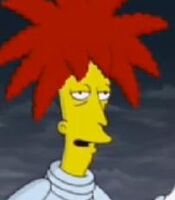 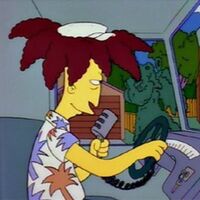 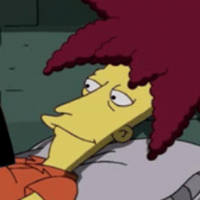