Legends of the Multi Universe Wiki
Register
Don't have an account?
Sign In
Advertisement
in: Characters, Heroes, Alternate Form,
and 42 more

The Digivolved form of MagnaAngemon, Seraphimon is an Angel Digimon whose names and design are derived from the Seraph and the archangel Michael.

As one of the Celestial Digimon, Seraphimon is the executor of the enlightened God's laws. He is dressed in holy armor that shines silver, and possesses ten golden wings. As the highest-ranked being among Angel Digimon, he rules over them all.

Although Seraphimon's true identity and personality are hidden behind a mask and cannot be glimpsed, he is the being closest to the Being of Goodness called "God". It is told that when Seraphimon descends for the final battle against evil beings, he will purify everything. Also, it is said that Daemon, who fell to the Dark Area and became a Demon Lord Digimon, was originally a Seraphimon.

Seraphimon bears the Crest of Hope on his plackart, and the DigiCode on his breechcloth are a quote of Sephiroth's from Final Fantasy VII which reads (全ては我と共に Subete wa ware to tomoni?, lit. "All shall be one with me").

MagnaAngemon is seen to take this form. 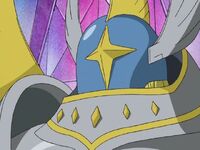 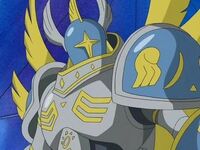 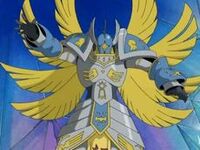 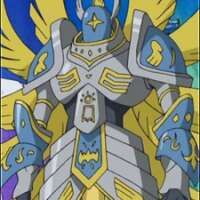 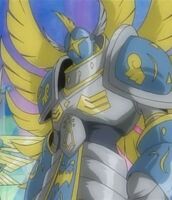 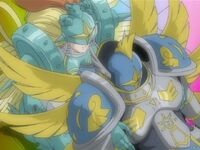 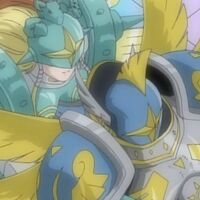