Legends of the Multi Universe Wiki
Register
Don't have an account?
Sign In
Advertisement
in: Characters from the Zoids Universe, Characters, Heroes,
and 65 more

Sally Land is a fictional character from Zoids: Wild ZERO. She is one of the main protagonists.

Sally Land first appeared as a damsel in distress, who was held captive by the imperial soldiers led by Luc. Upon bein resciued by Leo and Buzz, she began developing a new romantic relationship with Leo Conrad. Upon her freetime, Sally Land is a friendly, cheerful-hearted young girl, who loves spending time with her friends, including Jo Aysel.

After Hiroki Nagase and the rest of his friends were saved by the Tekkadan, Leo Conrad, Sally Land and their friends managed to destroy Judgement 6 for good. Following the victory of our heroes, Leo Conrad and Sally Land reported to Yuinshiel Asteria and her followers that the heroic martial artists and many innocent heroes were recently saved. She and her friends had visited Rona Tsunomori for the first time. After that, she was greeted by Kuroto Dan and Knight Unryuji to have a happy Ketogenic Dinner time in the Dinning Hall.

When Symphogear heroines and their friends have return home. She and her boyfriend woke themselves up in the next morning to enjoy the peaceful time in the Subic Bay Peninsular Hotel, along with Luigi Latorre. However, she heard the mysterious ships arrived on earth. She and her friends decided to visit Sento Kiryu and Milinda Brantini for the first time. Upon visiting them, Sally Land and her friends decided to encounter Kanami Etou and her parents. After they finished the meeting, she, Leo, and Luigi decided to join forces with Tekkadan. Sally and her boyfriend were hearing the ideal news that Yugo and Alice were kidnapped by Gjallarhorn and Time Jackers. So, she and her friends continue their journey to have a meeting with Dr. Dan and his companions. When the meeting was done, Leo, Sally, and Luigi might attempt to have reunion with Symphogear heroines and their friends. Suddenly, she and her girlfriend were attack by the Seven Stars' Animalistic Zoids. Leo Conrad and Sally Land were injured and wounded by Julieta Juris. Before they die, she and her girlfriend sacrificed themselves to assume Wild Liger's Evolution into Beast Liger. After the deaths of Julieta Juris and the Time Jackers, she and her boyfriend convinced Arashi and the heroes to put an end to Prozen's reign of terror. Dead, she and her boyfriend dissolved into living souls before ascension into Heaven. Following her demise, Arashi and his friends mourned for them. 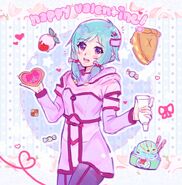