Legends of the Multi Universe Wiki
Register
Don't have an account?
Sign In
Advertisement
in: Characters, Villains, Superhumans,
and 22 more

Ruby Hale was one of the two secondary antagonists (alongside Qovas) in the second half of Season 5 of the ABC TV series, Marvel's Agents of S.H.I.E.L.D.

She was the highly intelligent but deeply psychotic daughter of General Hale, who was genetically designed by Daniel Whitehall to become the perfect leader of HYDRA, who also develops an obsession with Daisy Johnson/Quake, including a desire to defeat her and absorb the Gravitonium and become the 'Destroyer of Worlds'.

She was portrayed by Dove Cameron, who is best known for her portrayal as Mal in the Descendantsfranchise. 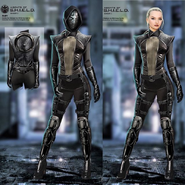