Start a Wiki
Pikachu (ピカチュウ Pikachu) is an Electric-type Pokémon, which was introduced in Generation I. He is renowned for being the most well-known and recognizable Pokémon.

Pikachu has electricity-storing pouches on his cheeks. These appear to become electrically charged during the night while Pikachu sleeps. He occasionally discharges electricity when he is dozy after waking up.

Whenever Pikachu comes across something new, he blasts it with a jolt of electricity. If you come across a blackened berry, it's evidence that Pikachu mistook the intensity of his charge.

Over the years, Pikachu has become so popular that he serves as the Pokémon franchise mascot. He is the Version Mascot for the game Pokémon Yellow. He is also well known from the anime, where Ash Ketchum, the protagonist, owns a Pikachu. Pikachu evolves from Pichu when leveled up with high friendship and evolves into Raichu when exposed to a Thunder Stone. When in Alola, he evolves into his Alolan form.

Pikachu is evolved from Pichu and can evolve into Raichu with the use of a Thunder Stone.

Its name is a combination of ピカピカ pikapika, which is and onomatopoeia for sparkle and チューチュー chūchū, the sound of a mouse squeaking. Its name is of Japanese origin.

In Generation VIII, Pikachu has its own Gigantamax form.

Pikachu became another important character in the Ultimate Story. She began as one of the heroes that were chosen to partake in the Ultimate Destiny. She was brought to a special school from her home planet, a distant world that was populated by only Pokemon and one that Ly watches over. At the school, she met and developed a very close bond with Fox. The 2 of them have remained inseparable ever since.

Pikachu was one of the few who were chosen to officially be a part of the Ultimate Destiny along with her best friend, Fox.

Much time after she had been training, a terrible disaster struck the school, forcing Lisa to abruptly return everyone to their home worlds, but she lost sight of where she had Pikachu sent. Pikachu wound up on Earth where she wondered aimlessly not knowing where she needed to go. Throughout all of it, Fox was always on her mind and she longed to one day reunite with him. She was eventually found by Professor Oak, who took her in and, over time, gave her to Ash as his first Pokémon. There, Pikachu also reunited with Lisa, who had been searching for her since they separated. Pikachu was also revealed to have held one of the 10 Pokémon stones inside of her. Misty, having just joined the group recently, was happy to have met Pikachu as she had already met and became close friends with Fox. She then promised Pikachu that she would reunite her with Fox. They eventually did once Ash got to Pewter City, and after that, they promised to let Pikachu see Fox as soon as she's done with Ash's mission on becoming a part of the Ultimate Destiny and find all 10 Pokémon stones.

Years later after Ash completed the mission, she hung out in the Great Fox with her friends Misty and Fox. Their mission was in Dinosaur Planet and she stuck to his side throughout the journey, even the fight against Andross.

Ness owns a Pikachu as a representation the names of his abilities, PK. He used it during his battles when he was the final Gym Leader.

Pikachu was first seen at Kokiri Forest as one of Zelda II's Starters. She helped Link and her comrades traverse through the Great Deku Tree and inside Jabu-Jabu. She also tended to zap Princess Ruto whenever she misbehaves. She was seen again as herself, instead of Raichu, as Link and the Electric and Psychic Types ventured into the Spirit Temple without their Trainer.

Legends of the Multi-Universe (Menslady's Story)

When Emperor X infected Ash with a malevolent spell which turned him evil, little Pikachu was devastated. Even though the Children of the Autobots loved him dearly as if he was their own, Pikachu was still heartbroken about Ash.

Fortunately, when Emperor X abandoned his evil ways, he chose to free Ash from the evil spell he had used to corrupt him. Ash tried to apologize to Pikachu, but Emperor X said that he was the one who needed to apologize. This he did, and Pikachu chose to put the past behind.

Now that he's reunited with Ash and not hurt by loss, Pikachu feels he can do a better job of protecting the Angels of Disney.

Recessional of the Red Dragons

Pikachu, aka Daffodil, is a Pokémon that is owned by an OC Trainer named Mary, the champion of the Kanto region. She is one of Mary's close companions; in fact, she never has her own Poké Ball as she always prefers to ride upon her owner's shoulders. Much like any other Pikachu, she's light, playful, and also powerful with her agility and shocking moves. She belongs to a team of six and she tags along with them during an interplanetary war. She was very helpful, even when she and the other electrical rodents helped her dismantle a minefield.

Mary and other Pokémon OCs belong to pikaace.

Pikachu was actually one of Mewtwo's clones, specifically from Ash's Pikachu during the events in Mewtwo Strikes Back. She was one of many Pokémon recruited by Mewtwo and Akari as they made their journeys in Mainframe. At one point, during Infected and Bad Bob, she at first functioned as one of the Electric Pokémon used as a power source for the System, from powering up the Stadium as the System was being erased, to giving the Principal Office some juice as the energy supply was trapped in a Game.

Her most major role started during a System Crash, or rather a System Shock. She and Raichu worked together to fight off the Users from undeleted RAM released by "the instabilities of the System." She, in particular, was in the Office dealing with the Zombie Slayer. While she was agile, she wasn't very strong, and Nidorino and Frisket brought him to an end.

She also appeared again during the saga, Daemon Rising. She was one of the Pokémon cameos during the tournament Samus set up as the fate of the Net hung in the balance. She was involved in a fight between the bounty hunter and Bob, as an infected Guardian that'll carry on The Word. With some shocking moves, she was a vital help to Samus and they both won the battle in Brinstar Depths, and soon the war overall.

Pikachu made some slight cameos as Akari returned to Mainframe after so many years while fighting off the trojan, Megabyte, and Gnosis. 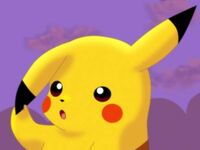 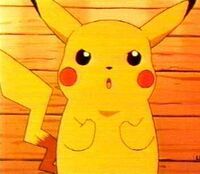 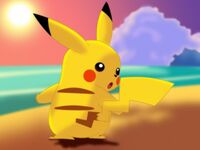 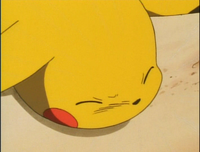 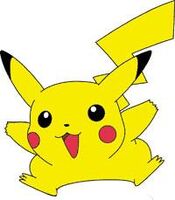 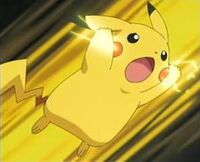 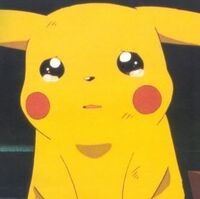 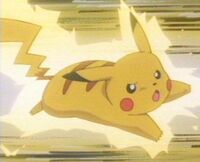 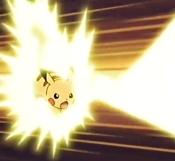 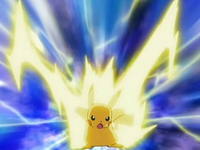 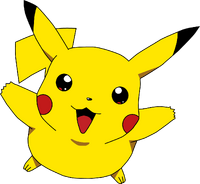 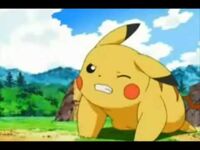 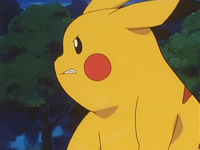 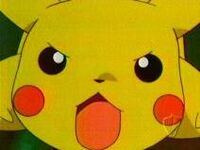 Pikachu has a drink of water 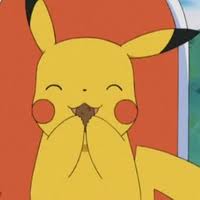 Pikachu has a snack. 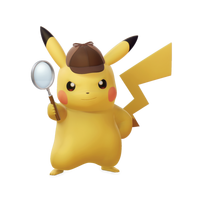 Pikachu in the film Detective Pikachu 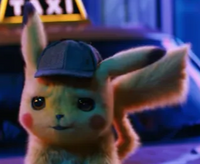 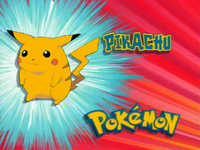 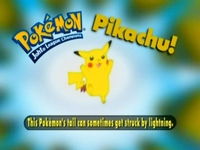 Who's that Pokemon? (Johto edition)

Who's that Pokemon? (X and Y edition)

Who's that Pokemon? (Sun and Moon edition)

Pikachu with her team at the Spirit Temple (Child Link)

Pikachus in M22
Add a photo to this gallery
Retrieved from "https://legendsofthemultiuniverse.fandom.com/wiki/Pikachu?oldid=727173"
Community content is available under CC-BY-SA unless otherwise noted.