Legends of the Multi Universe Wiki
Register
Don't have an account?
Sign In
Advertisement
in: Characters, Villains, Humans,
and 16 more

Omega Red is an evil mutant from the Marvel universe.

Omega Red isa living weapon, created by generals of the Soviet Union as a counterpart to Captain America. Omega Red proved to be too powerful for the generals to control, and he was placed in frozen in cryogenic suspension in a facility in the Kumudski Valley.

The Nighth Begins to Shine

Omega Red somehow escaped from the sank sub and join forces with Ultralak. 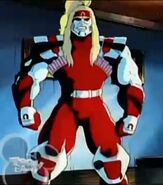