Legends of the Multi Universe Wiki
Register
Don't have an account?
Sign In
Advertisement
in: Special Agents, Spectacled Characters, Strategists,
and 31 more

Matori (Japanese: マトリ Matori), or Giovanni's secretary (Japanese: サカキの秘書 Sakaki's secretary) in the English dub, is a recurring character in the Pokémon anime, making her debut appearance in Memories are Made of Bliss!.

Between the end of Diamond and Pearl and Best Wishes series, she wears a corporate attire and her pants that are colored crimson between the sides of long sleeves of t-shirt.

Matori is a cold, harsh woman. She is loyal and faithful to Giovanni during the evil schemes of Team Rocket. Shown in countless times, she delivers messages to Jessie, James, and Meowth, or she demands reporting from them. While talking and communicating with Team Rocket Trio, she is noticeably more cold and harsh.

In Sun and Moon series, she is more of her relationship when the Team Rocket Trio is fleshed out. She became an evil rival figure to Jessie, who had dislike for her, when she considers Matori's demeanor to be too authoritarian and almighty due to her boss' superiority. She angrily mocks her: "four eyes" and "loser locks". The Team Rocket Trio are loyal to her. They appear neutral against her.

During her side, she is sad that the Trio became failures numerous times. She shows respect to for them when they report accomplished achievements of obtaining Alolan Meowth or the Z-Power Ring. When the trio responds, Matori decided to ignore it.

During the rest of her mission, she became the elit of Team Rocket's special unit, Matori Matrix. While leading her unit, she wears a Team Rocket uniform that it was outfitted in a military fashion. She can accomplish missions at any cost. During her reckless side, Matori decided to give up her mission on pursuing the Ultra Guardians in the Ultra Wormhole after the Matori Matrix ship was recently damaged.

Matori first appeared in the story. She's often teamed up with the Time Jackers to fight off against the Force of Hevenburg, but she only considers her partner as a tool. After surviving the destruction of the Team Rocket's Matori Matrix ship, she acted of her final stand. Matori was ultimately killed when Hondao, in his Bio-Tyranno, threw Souta's Lanstag's lance at her Bio-Ptera. 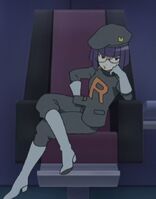