Kyuubey is the main antagonist in the anime and manga series Puella Magi Madoka Magica, and had some minor roles in its spin-off mangas Kazumi Magica and Oriko Magica.

He appeared as the "Messenger of Magic" who would grant wishes to girls. However, in return they sign a contract, and serve as a Puella Magi (Magical Girl). Their job was to kill Witches, creatures that fed on the hopes or dreams of ordinary people. However, this is actually just a distraction from Kyubey's true goal.

Kyubey also known by his true name The Incubator has been with humanity since the prehistoric times to turn it's female gender into magical girls to kill the witches and help send their negative energy for him to devour in creating new worlds for the endless spanning universe.

Kyubey manipulates women to do his work for him and does so by making a deal that would turn them into magical girls if they accept his contract to grant them a wish whether by power, forcing someone to fall in love, or fixing the troubles that won't seem to end sooner. The price that he didn't mention is the soul that gets sealed into a gem and the body getting turned into a lich.

Should there be a threat to Kyubey's plans of a magical girl getting in his way like Homura Akemi, Kyubey has useful pawns such as Mami Tomoe to help eliminate the interference with death.

In an alternate future where Madoka Kaname becomes a planet destroying witch, Kyubey held no remorse to what's happening and said emotionlessly it was not his problem that all of humanity and planet Earth are gonna be destroyed and he has reserves to help contribute to the problem from other worlds.

Kyubey has caused much death for the women as the wishes also become their curses.

Kyubey withholds information to his magical girl contractors never mentioning the consequences of accepting his deal until far later just to unease the feeling to the heroines.

The Soul Gem's that take in too much of the grief can potentially turn the user into a witch if the Gem's not purified. If the girl is seperated from her Gem in her lich human body, she will become an inanimate cold body that will eventually be dead if the Soul Gem isn't recovered in time. This has saddened Sayaka Miki's chance of falling in love and live the life of having a family.

Kyoko Sakura's Dad, once he found out that the recruited members to his church were magically rigged, he slaughtered Kyoko's mother and little sister then committed suicide burning himself to death.

Physical contact with the Soul Gem, also reflects the damage to the user as Kyubey painfully demonstrated on Sayaka Miki's location to the stomach that brought her alot of pain there.

Kyubey has joined with Cesare to tempt Female Heroes into accepting his magical girl deals to take the souls of evil beings to help construct more planets. 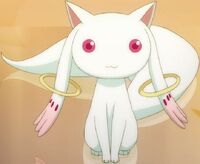 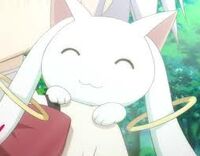 "Kyubey and Monokuma"
Add a photo to this gallery
Retrieved from "https://legendsofthemultiuniverse.fandom.com/wiki/Kyubey?oldid=783990"
Community content is available under CC-BY-SA unless otherwise noted.