Legends of the Multi Universe Wiki
Register
Don't have an account?
Sign In
Advertisement
in: Characters from the Gundam universe, Politicians, Characters,
and 31 more

Kudelia is a strong willed, courageous woman who is willing to risk her life to fight for her ideals and protect those precious to her. She has a great love for Mars and its people, causing her to start Mar's bid for independence from Earth. Her sheltered life gave her a somewhat naive perspective about the suffering of the Martian people. It was only after travelling with Tekkadan did she develop a greater worldly understanding of the problems Martians suffered. Throughout her time with Tekkadan, she develops close bonds with the group, especially Mikazuki and Atra. She is very loyal to those who earn her trust, never doubting them and standing by their side.

She is a pacifist by nature, always looking for the best solution with the least bloodshed. She aspires to be a symbol of hope for the people of Mars.

Along with Kenzo Tenma and Atra Mixta, Kudelia first appeared as one of Lady Yuinshiela Asteria's allies. She and her friends must take the responsiblity to help people as well.

She, Kenzo, and Kudelia met the people of Mars, along with Symphogear heroines and their friends. After the meeting was done, she and the rest of our heroes join the people of Tekkadan with their dangerous adventures.

After arrival on earth is done, she, Kudelia, and Kenzo decided to part ways with the heroes. When he, Kudelia, and Atra were ambushed by Mikie Okamine for the first time. They survived the attacks and ambushes. Fled into hiding, Kenzo decided to argue with Kudelia and Atra. However, the two were interrupted by Mikie Okamine who had overheard everything and has decided that Kudelia Aina Bernstein is indeed an idiot.

Kenzo Tenma and Atra Mixta die protecting Kudelia, as she gave the information to Sento Kiryu. She warned him to quickly intercept Veda before the Innovators can move it. Sento asks her to come with him but she declines, stating when he is already gone that they are after different things.

Kudelia attempted to flee on the car, only to be once again confronted by Mikie Okamine/Bio Volcano, who destroys the car killing her on the spot.

Kudelia acted as an advisor to Captain Harlock of Hevenbrug. She and the heroes fight back against Great New Empire. However, she and Atra were killed by Bio Tyranno for good. 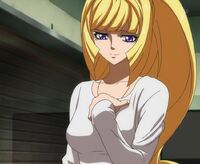 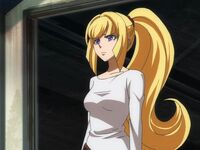 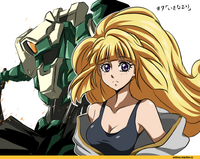