Legends of the Multi Universe Wiki
Register
Don't have an account?
Sign In
Advertisement
in: Characters, Heroes, Humans,
and 25 more

Kira Yamato made a debut as one of Yuinshiel Asteria's followers. Kira Yamato made friends with the fellow Mecha Pilots: Heero Yuy, Setsuna F. Seiei, and Ruuji Familon. Aside spending time with them, Kira decided to look after the Symphogear heroines for everyday training. 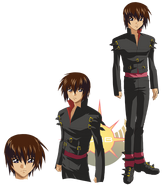