Kingpin is a villain from the Marvel Universe.

Played by: Michael Clarke Duncan in the Daredevil live-action movie and by Vincent D'Onofrio in the 2015 Netflix series of Daredevil

Kingpin will debut in this story as one of the main antagonist alongside his rivals, Johan Liebert, Beelzeboss, and the gods of Olympus.

Before the story, Kingpin is one of Nick Fury and Agent Coulson's archenemies, they foiled his plan, and now Kingpin will get his revenge on them for foil his Criminal Plan. He joins forces with a partner named Gus Fring to do this. He also have rivalry with Xanatos.

Kingpin appears here alongside Gus and joins with Eobard Thawne and the League of Villains for what they consider a happy ending. He works under The Joker like Gus, but unlike Gus seems to be more eager, it is possible that the two might go their own ways. Kingpin is assigned to help Vilgax prepare his trap for his treacherous 2nd in command and the other members of the team.

He joins The Joker with many of his associates and leads an attack on his former boss while The Joker makes his other plan going well. He ambushes with Vilgax and nearly tries to kill Finn and Amanda but eventually flees after Django and the others show up to help them.

Kingpin works with Joker's group to get Joker's parasites and alongside Gus leads the fight against the heroes. Kingpin joins Dr. Weil in an attempt to capture Discord, Colress and Rick which they play their part with him working with Mike to catch Axel and Suede, though the latter two win, they make off with the others. Axel and Suede break on through to their hideout and Kingpin like his associates are arrested by The Galactic Federation.

Kingpin tries to kill Dennis over his betrayal but is unsuccessful but Deathstroke releasing him is when he gets a chance and Deathstroke uses this as a chance to kill Dennis. Kingpin works to get the spear for Thawne and goes against The Legends in this and he gets into a power struggle with Gus over who should run the criminal empire. Kingpin stays by Thawne and Gus sides with Deathstroke and Bender . The two criminal masterminds fight after the spear's effects occur in the multiverse with Kingpin being defeated when Mike snipes him from behind after nearly killing Gus. 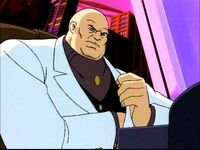 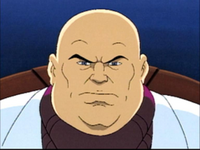 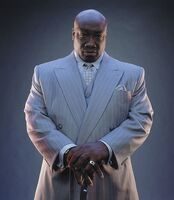 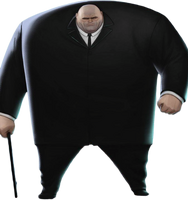 Add a photo to this gallery
Retrieved from "https://legendsofthemultiuniverse.fandom.com/wiki/Kingpin?oldid=729432"
Community content is available under CC-BY-SA unless otherwise noted.