Kingdom of the Cosmos, also known as Global Kingdom, Global Empire, Kingdom of the Cosmic World, Continent of the Mobs, Mob Kingdom, Mob World and The Great Continent is an original OC continent/nations from LOTM: Sword of Kings that serves as the main setting for LOTM: Shadows Within Shadows.

It's not an organization but a whole continent composed of 23 different kingdoms. In this continent, the Queen is the true ruler so she holds power over the king, but gives him authority to rule as she sees fit while she is away dealing with diplomatic relations. When the male genre were erradicated by a fatal disease that struck the continents many billion years ago, the continent fell in disaster and waves of monsters ravaged the continent and other regions of the world. This resulted in the destruction of the demi-human protected villages and many other species of mobs.

The Kingdom of the Cosmos is an extremely old continent founded 15 trillion years ago after the creation of the Lynenta Omniverse. They were one of the first kingdoms in the history of the Multi-Universe and prevailed until the present days. They are literally composed by monsters of all kinds, such as dragons, zombies, vampires, endermans, skeletons, spiders. They also were the first forms of life to exist in the Universe of the 6th Multi-Universe. They created weapons, magic, teleport but never acquired technology because Minecraftia was a world isolated from the rest of the universe.

They are an original multi-group created by DestroyerSubjugator90.

They are considered a huge kingdom with various types of beings, each species has a kingdom and everyone cooperates with each other, however, there are species that always hated themselves and ended up going to war, Endermens once had a war with the skeletons. Over the years, the queens of the kingdoms were dying old and the kings continued to live because the female genre of their species have less lifespan compared to her male counterpart whom could live for many million year. Some kings are said to be living since the creation of Multi-Universe to this day.

The continent has had a long history of wars between neighboring countries, most notably with the human nations invading other Mob Kingdoms until they were wiped out by the combined forces of the Superior Kingdom and Light Kingdom. This was mostly due to the racial discrimination that existed in both nations against the other race and also because of the religious belief of the other nations/races viewed as evil entities.

Due to the matriarchal nature of the kingdom, Melromarc practices the tradition of having the husband's name decided by the wife.

At some point when the Cosmic War II between the Jedi and Sith begun, a serious disease affected all species of Minecraftia, the disease took away all the males of the Minecraftia and no male was able to be born into that planet for million years. In fact, no male was born since then, not even the female genre that reproduced asexually failed to give birth to a male of their own species.

The men left were the kings, but they were ugly and grotesque monsters. One day, a human female was born mysteriously with the evolution of species in Minecraftia, the kings took interested in her appearance and extracted her DNA to implant the human's DNA into their daughters. Their daughters gained human appearances but due to DNA's nature, the human appearance blocked half of the princesses' powers. The consequences of becoming half-human prevented the princesses from using their full power their. In case of combat, they were forced to transform into their true forms but they could still change back to their human appearance. However, an illness also came with the human DNA; the disease given by the DNA struck the princesses' hormones and when they completed a million-years old, they would lose their human appearance and return to their original form forever.

Over the years, more humans were born into that world, but those humans were cubic mobs. Unlike humans that were square in that world, the Princesses and Kings/Queens possessed normal appearance; they have bodies, curves, sizes and faces; princesses and queens are normal unlike their servants and humans that are all squared beings, doomed to live as cubic beings. Human villages are constantly attacked by other Mob Kingdoms to make the innocent civilians into livestocks for their economy and people. Although there males among humans the Princesses do not like them because they are cubic and aren't attractive. There is just a normal single male in the world of Minecraftia, Riot, the Prince of the Zombies, however, most Princesses hates him because he is a rotten zombie and stinks. Riot takes advantage of the fact he is the only man with normal human appearance to win the maximum of the princesses he desires. Everyday, he trained hard to maintain a handsome male appearance, but that only made the others Princesses even more digusted of him.

One year, the Triggers Hell invaded the Kingdom of the Cosmic and took many monsters of the kingdom to Hell where they would become livestocks or slaves to serve Leohart the Prince of Hell. There was a war in the Kingdom of Cosmic (as was the entire multiuniverse). However, the kingdoms fell before the demonic forces of Triggers Hell. Fortunately (or unfortunately, depending on how you see monsters that devour humans) the princesses, kings and some servants hid and survived until the demons and fallen angels of Triggers Hell leave their world. Once the Triggers Hell left their world, Minecraftia become a lifeless desert; where there was water turned sand, where there was forest turned desert and the sky become a huge cloud of red smoke that covered minecraftia. Over the years the survivors were reproducing and rebuilt what was destroyed by Triggers Hell.

Hundreds of years have passed and everything that was destroyed was rebuilt and the peace was maintained again in the kingdom. They do not know who those cruel beings that have invaded their world, but that invasion became a tabuu in minecraftia. Over time the kingdom was earning structure again and they created an event called Minecraftia Monster Arena, an event which brought together all the princesses (and prince) of minecraftia and make them fight among themselves to see who was the strongest being of Minecraftia, this event also created rivalries and friendships between the princesses. Andr, Princess of Endermen (a strange girl who was found in the world of Minecraftia and adopted by Enderdragon) was the strongest of all and never lost a fight, and because of that she was feared by all in minecraftia. And so when the Multiuniverse War began, Katarina Couteau fell in their world accidentally, leading to the actual events of storyline. Later, the join Alliance of Freedom to avenge their homeland and defeat Triggers Hell and so showing remorse for their actions. 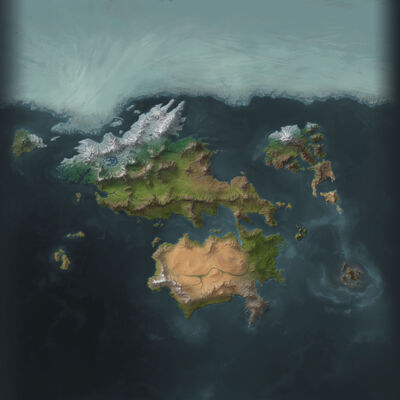 Surrounded by treacherous seas, the continent of the cosmos is composed of a number of allied provinces scattered across a massive archipelago, known to many as the First Lands. Since the continent's culture has long been shaped by the pursuit of balance in all things, the border between the material and spirit realms tends to be more permeable here, especially in the wild forests and mountains. Although these lands’ enchantments can be fickle, its creatures dangerous and fae, for many centuries most its inhabitants led lives of plenty.

The warrior monasteries, provincial militias—and even continent itself—had been enough to protect them. But that ended 3 billion years ago, when Triggers Hell attacked the First Lands. The demonic empire's seemingly endless warhosts savaged the continent, and were only defeated after many years, and at great cost thanks to the sacrifice of the Princess of the Hydras, Hyme, who is now worshipped as the Goddess of Hope and Freedom by all kingdoms for her efforts in fighting back the dark forces of Ragnarok Iblis. Soon after, the mobs that survived split themselves in factions and formed different national kingdoms and empire with their own kind only. Now, the continents exists in an uneasy peace. Different reactions to the war have divided the region—some groups, such as the Creeper Cult monks or the Kinkou, seek a return to isolationist pacifism, and pastoral traditions.

Other more radical factions demand a militarization of the land’s magic, to create a single, unified nation that can take vengeance on Triggers Hell. The fate of the Kingdom of the Cosmoshangs in a delicate balance that few are willing to overturn, but all can feel shifting uneasily beneath their feet.

In times of Ender Dragon's Youth, all Mob Kingdoms made their mark for their resourcefulness, as they were able to fight on par with the mighty Triggers Hell's Imperial Army which dreamed of world conquest. But, in times when their glory and strength went downhill, they did all they could to prevent the Princesses from crossing the border, for they were fearing a war with Lazarus' Empire that was a division of Triggers Hell that ruled that world from the shadows. The queens used their diplomatic wit to prevent war, even willing to marry off their daughters to Lazarus to prevent the war.

The continent is a matriarchal continent under the monarch of the queen, who holds the highest authority. Along with being a matriarchal country, the kingdoms has an oligarchy power structure with powerful nobles bidding to keep in the favor with the monarchy for power and influence. In society, women hold higher social value and power than men. Any violence against women is considered to be an offense punishable by the death penalty.

Retrieved from "https://legendsofthemultiuniverse.fandom.com/wiki/Kingdom_of_the_Cosmos?oldid=653394"
Community content is available under CC-BY-SA unless otherwise noted.