Legends of the Multi Universe Wiki
Register
Don't have an account?
Sign In
Advertisement
in: Characters, Villains, Malefor's Alliance,
and 59 more

Khan is, well, Khan. He's a well known villain from the Star Trek Universe, being quite similar to Captain Kirk.

Once being a member of Megatron's inner circle he caused tragedy in the Star Trek Universe by destroying Starship Enterprise, leaving only Kirk, Spock, and Bones alive, who joined the Children of the Autobots.

Sometime in between when he left Megatron for his own agenda, he was killed by Q and the Star Trek Next Generation. He was resurrected by Discord, who had him supply stuff to the Borg Queen to extract revenge on Picard. When this failed, Discord tried to kill Khan but Khan escaped despite being badly hurt by Discord and Stane.

Khan joined Malefor as his own right hand man to expel revenge on Discord and on The Star Trek Next Generation Universe. Khan alongside his allies makes the challenge to the universe to see if anyone is man enough to go against them. When apparently no one knows where Equestria is, Khan  has an idea how to lure someone out and asks K.Rool to do it. He takes on the task of getting the info out of Harvey Kinkle with the help of Carnage and Horvath. He leads the attack on Equestria with his allies and when it's done with he confronts Bender, Skipper, Slade and Bowser on this. He reports this back to Malefor when he returns and when the others tell him he recalls his encounter with Slade and Bender. Khan gives news to Malefor about Okionney's death while deciding on working something against the heroes. Khan is seen with Malefor advising him that he can't just force The B Team to say or do something considering that Axl isn't talking or anything. Khan decides on blowing Interpol which he does with the Pack placing bombs all over the station. Khan afterwards has Malefor call on Darkseid to the next part of the plan which goes well and informs Jr and Dredd that Vengeance on Bender and his friends for ruining their ship and plan is coming.Khan is next to leave as he and Malefor work on a plan to kill off Zordon. As Malefors main enforcer, Khan is the one who directs the rest.

Khan goes on his stolen ship with some of his allies, though he refuses Giovanni and Ozai's help. Khan then takes orders from Malefor to do what he wishes. Khan then talks with Blackbeard over the success of the mission. Khan locates the Enterprise in which Bender and Slade are using. He gets news from Quantrich, Saddler and the new recruits about finding the RCMP Suit. Khan sends them on their ways as he tries to force Slade and Bender to give the biometals under threat of laser shooting. Heloise teleports them away with Khan picking up the sense and deciding to follow them

Khan is confronted by Bender, Skipper, Heloise, Phineas, Isabella, Suede, Slade and Anti Cosmo, he believes that they are here in person to give him what is rightfully his. Slade and Bender decline this and decide to fight Khan, Suede joins in the combat with Heloise playing dirty to give them the favor. The Fight is tedious though the trio triumphs and Heloise freezes him to have not do anything regarding his ship. Mitch has him out before Darkseid takes over his ship. But he takes the wrong one as Darkseid ejects him out after thawing him out after decling MissingNO to absorb him. Khan contacts with Ursula and insists on someone to go for Hiccup, when Jackal offers, Khan declines as Jackal is anything but subtle.

Khan is seen with Penelope where she gives Silas his roboticness form. Khan reminds Silas that good things come to those wait those he ignores him. Khan and Malefor come up with a plan regarding to find out Darkseid's plan since it could threaten them.  Khan and Horvath see what Darkseid did to King of Sorrow and they aren't happy. Khan reports on Slade's allies going after the destroyer, as a result he and Giovanni sent Mitch after them.Khan decides as a result of the heroes' intervene that they must destroy them and that Khan and Malefor should fight the heroes as a team. Khan fights Bender, Slade, Hiccup and their allies alongside Malefor in a long scale battle.

Khan is defeated and arrested by Slade and Bender who both bring him to Kirk.

Khan is brought out of jail by Anarky and Goffrey who both bring him into the terroist unit to help against the heroes and Kenway who Anarky sees as tryantical.

Toffee pulls him out of his fate to help him and the legion in their plans which he does, as Toffee sees him the only worthy member of Malefor's team to work with. He attacks the teams in revenge and commands a lot of attacks on the heroes space wise. He is also saved by Toffee after the multiverse is altered and recruited into Bill Cipher's cult

Khan works with Toffee and Bill to conquer Disney World and enforce their will through the multiverse, Unlike most of the legion, he is aware of Bill being part of this and Khan serves Bill. When Toffee and Bill come up with their plan to get the spear of destiny, Khan reveals that he, Tak and Unalaq managed to get the trophies Toffee needed since he knew that Deathstroke would take them back.

Khan gives them over and then takes the starship to bomb down on the heroes and to destory their hideout with the others in there and this is when Mike stealthy sneaks on ship to fight Khan. Khan mocks how a old man could possibly take him in his state of mind, only to be proven rather wrong when Mike fights him pretty well despite his age and this is when Lynn, Luna and Lola are all on The enterprise making explosives to blow up Khan. When Khan is ready to kill Mike, This is when Mike reveals his ace in the loud sisters placing bombs in the enterprise and Hunson takes Mike out leaving Khan to die in the explosion. 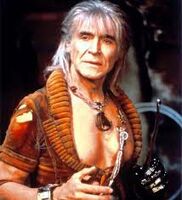 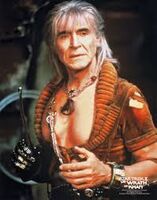 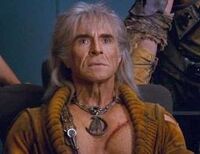 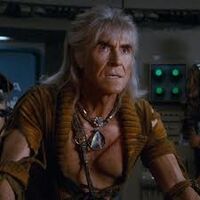 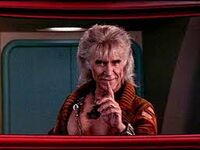