Legends of the Multi Universe Wiki
Register
Don't have an account?
Sign In
Advertisement
in: Characters, Heroes, Characters that hail from the Monster Universe,
and 37 more

Kenzo Tenma is the main protagonist from the Monster series.

Tenma is a Neurosurgeon at Eisler Memorial Hospital.

Tenma is a workaholic who prioritizes his patients and their well-being more than anything. Although he's a highly skilled neurosurgeon, he confesses to Inspector Lunge that during a surgery he's jumping out of his skin due to the fright of committing a mistake.

Tenma is often obsessed with saving as many lives as he can. Johan enjoys toying with this mindset, sprouting several massacres possibly to challenge Tenma to prevent them.

His kindness is prevalent trough the series - in contrast to Johan's unscrupulous nature - and he sometimes ponders about the moral of his actions. When he is worried (often with Johan) he neglects his own self care and goes as far as collapsing for lack of food or sleep. Other than that, he's overall an optimistic individual, or tries his best to seem so to others, giving words of encouragement to the people around him.

When Lunge enters Tenma's psyche he discovers that Tenma doesn't fit in either Japanese or German society. Nevertheless, Tenma isn't too unsociable, and ironically in several flashbacks (Eva's and Rudi's) he is seen happily hanging around in a group. He does prefer to work alone rather than in a team if he can help it though.

As a member of The Anime Empire, Kenzo Tenma was a Chief Medical Officer for Emperor X who helped tend to the sick and wounded, though only at specific places of their damaged body. With his amazing skills as a Neurosurgeon, the survival rate of patients brought to him were increased to a higher rate.

Kenzo Tenma debuts as a major character and he will meet Johan Liebert again.

Kenzo Tenma made a debut as one of the supporting allies of Yuishiel Asteria and her followers. He, Kudelia, and Atra met the people of Mars, along with Symphogear heroines and their friends. After the meeting was done, he and the rest of our heroes join the people of Tekkadan with their dangerous adventures.

After arrival on earth is done, he, Kudelia, and Atra decided to part ways with the heroes. When he, Kudelia, and Atra were ambushed by Mikie Okamine for the first time. They survived the attacks and ambushes. Fled into hiding, Kenzo decided to argue with Kudelia and Atra. However, the two were interrupted by Mikie Okamine who had overheard everything and has decided that Kudelia Aina Bernstein is indeed an idiot.

Kenzo Tenma last appeared as a supportive ally of Hevenburg Force. He takes a responsibility to take care of Atra and Kudelia. Suddenly, he got killed by Bio Tyranno. 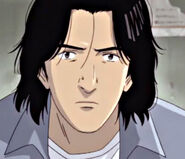