Legends of the Multi Universe Wiki
Register
Don't have an account?
Sign In
Advertisement
in: Characters, Heroes, Supporting Characters,
and 40 more

Kanami Etō (衛藤 可奈美, Etō Kanami?) is the main protagonist of the original anime series Toji no Miko and a second-year student in the middle school division of Minoseki Academy.

Kanami Eto first appeared as the loving daughter of Yugo Ogami and Alice Tsukagami. She first fought Milinda Brantini as a major rival. When the meeting was done. She and her parents got ambushed by the soldiers of Knights of Gjallarhorn. Upon being rescued by the arrivals of Akira Yuki and Lime, Kanami was crying that Yugo Ogami and Alice Tsukagami were kidnapped by the Knights of Gjallarhorn. She later joins forces with Lady Yuinshiel Asteria and her followers to become the pilot of Liger Zero in order to save her parents from Prozen's grasps.

The training caused Kanami Etou to get stronger. After Mikie's death, Kanami is now challenging in a rematch against Milinda Brantini and her Gundam Barabatos in epic warfare. The tables have turned. Kanami and her friends fight back against the remaining forces of Knights of Gjallarhorn to defeat them for good.

After the deaths of Leo Conrad and Sally Land, Kanami and her friends embarked on a side adventure to find her ancestors, who defeated Muzan Kibutsuji in a century ago. After making it to Fujikasane Mountain, Kanami met her ancestors known as the Demon Slayer Corps for the first time, especially Paimon. Kanami is ready to have a superhuman training with Demon Slayer Corps in order to get strong. After a long epic traning, Kanami successfully developed her superhuman powers of Demon Slayer Corps by letting herself be empowered.

Elemental Manipulation - Kanami can create, shape and manipulate elements, the rudimentary, simplest or essential parts/principles of which anything consists of. This can entail power over things which the universe consists and is made of, like atoms and molecules.

Breathing Empowerment - Kanami becomes stronger, faster, more durable, etc. from the breathing of oneself or others, possibly unlocking abilities related to the affinity and enhancing existing powers. Some users may be able to draw sustenance from the breath or even slow or stop aging.

Enhanced Swordsmanship - Kanami is able to demonstrate a natural aptitude for the ways of the sword. Regardless, of the sword’s shape or size, the user can wield it as if it were an extension of their hand(s). They can wield a sword with incredible expertise in speed, power, and skill, allowing them to perform feats such as stopping and deflecting bullets, decimating large objects or areas, cutting through solid material such as steel, and even hold back their strength to deal damage to their foes without killing them. 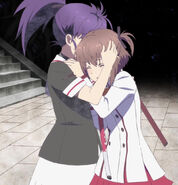