Legends of the Multi Universe Wiki
Register
Don't have an account?
Sign In
Advertisement
in: Characters, Members of Dib and/or Bender's gang, Heroes,
and 113 more

Jimmy Neutron is a 11-year-old boy genius who served as an inventor and ally to the heroes until his (supposed) death at the hands of Hordak. He joined the team to avenge his parents' deaths at the hands of Joker. Jimmy Neutron returns in Totally Mobian Spies as a clone as Neutron has many clones of himself.

Greatest Strength: His knowledge in science and intelligence

He wears red and blue like typical heroes and he has ice cream-like hair that sticks up with blue eyes.

An inventive kid hero is one way to describe this kid. He's arrogant but also sweet about his intelligence as he loyally helps Bender and...to a less extent...Dib against the villains. He also is shy around his rival Cindy as he is in love with her but he won't admit it as he is prideful and fights with her a LOT

Jimmy Neutron learns of Anti Cosmo's plans and he recruits Cindy, Spongebob and Patrick unaware of the latter's treacherous. He then meets Jorgen, Cosmo and Wanda and gets their help. Eventually Patrick betrays the team and only Jimmy and Cindy escapes but eventually they find Spongebob and Jorgen who escaped. They then join Skipper and the penguins until once again he and Jorgen are split the group and join forces with Bender and Starfire who split from Dib and they help the duo get info on Joker's return.

Jimmy returns again to assist Bender, Starfire, Jorgen, Skipper and the Penguins against Uka Uka and he plays off alongside Skipper as Bender's right hand man for his intelligence. He helps Bender gain immortality and gives Django a never breaking guitar and assists him with the Shadow Realm feeling

Unfortunately he doesn't live to the end and is killed by Hordak. Bender, Skipper, Julian and Ice King hold a funeral

Jimmy Neutron unexpectedly returns in this story as one of his clones (just not his evil one) Bender, Skipper, King Julian and Django are confused how he could have returned when Sandy confirms he's a clone. Jimmy then helps Bender, Skipper and co with toybots and makes a deal with Professor Calamitous' unappreciated Chadbot so they can contact his friends. Jimmy's memories are brought back afterwards and is glad to see Bender, Skipper, King Julian and Django again. Jimmy then calls Danny up and brings him back to assist him in their Amnity Park saving. Jimmy then is reminded by Chadbot of their deal which he is full on. Jimmy is ready to head Fairy World after dealing with more toybots. Jimmy Neutron then takes Fairy World back from the villains a second time, as he did it once again Mr. Crocker.

Afterwards Jimmy decides to go in hiding for Bender, Skipper and Julian and direct the go-away members to find Eddy. When Bender and Skipper tell things on Neutron this worries Lizbeth as she wonders if she saw him for real or she hallucinated. Jimmy will return to help the ones going for the main villains. Jimmy then accompanies Professor Pericles and the V Team to save Jerry while Bender stops Terrance Lewis

Jimmy, Carl, Sheen along with there friends, SpongeBob, Patrick, Timmy, Danny, Spyro, Cynder, Lloyd, Sheena, Huey, Riley, Naruto, Sonic, Tails, Knuckles, Amy, the Mane Six (with Unicorn Twilight), Sly Cooper, Mario & Luigi where have a good friendship get-together for all there time of team work, when one of Jimmy's Inventions go haywire sending them in the beginning event of InFAMOUS.

Jimmy returns and will potentially confuse Dib with the fact he's around since you know they though he was dead. He follows Bender and Skipper in their side of the story. He is told about Discord from Bender and Skipper. He then helps Heloise, Bubblegum and Phineas with finding their first location. Jimmy Neutron then helps Pericles and Reaver in decoding the secret message of the ring. When the crew arrives at the grotto, Neutron is kidnapped by MOM. Neutron is saved by his friends and then uses the toybots with Django, King Julian, Katara, Zuko, Bubblegum, Asami and Betty to give the Nerd an opportunity to get to the spider bot.

Neutron then joins his male friends after the team get separated from the girls and helps them with success.

Jimmy made his first appearance in Ultimate Story 3. Jimmy camped out in his lab after the people of Retroville were fed up with his inventions going weary and nearly destroying the town. Because of this, the entire town had fallen into chaos trying to bring him out. He was then joined by his friends Timmy Turner, Spongebob Squarepants and Danny Phantoms, whose worlds have also fallen in disarray and were blamed for the chaos. All 4 began to lament in the chaos with no hope until Fox and his friends arrived to help them fix it. They then revealed to 4 boys that there is an anomaly called the Rifter that will swallow up all of their worlds within 24 hours. They intend to save it just like they did with the other worlds but told them that they had to clear out the chaos within each of their worlds before they can. So, they decided to team up and take care of everything while having themselves alleviated of the blame and have the real masterminds exposed.

He and the group returned to his world after clearing up the chaos within the other 3. He and the group were then confronted by the angry mob within his town, demanding that Jimmy were to leave Retroville forever. The rest of the group defended Jimmy, trying to tell them that everything was an accident and that he never meant to hurt anyone, but the mob wasn't having any of that. Cindy then stepped up to shout all of her grievances. However, the Outer Dimensional Spirits noticed something odd about her and asked Fox to provoke her, to which he happily did. From Cindy's fits of rage, the spirits were able to did into her while sensing out all of the people behind her and found that she had been manipulating everything. From there, the spirits revealed everything that they had found out from analyzing everything. Cindy was a member of the Descendants of Darkness and that she had sabotaged Jimmy's inventions into going berserk and nearly destroying everything and had also caused all other grievances and calamities to the town, including summoning the Yolkians by pushing Jimmy's machine in another direction towards the evil alien race.

After they revealed everything, Cindy removed her facade and confirmed everything that the spirits had revealed was true, much to the shock of Jimmy and the few others that allied with him.

Jimmy with his friends return as a result of a transaction coming from the future that they get as well as Slade's Ensemble and they end up time traveling answering to it where they and Cas end up joining forces against a new threat as a way to prevent themselves from doing this in their near future.

Jimmy is part of Starfire's crew to save Bender and Jorgen as they need to get the group together to fight Eobard Thawne. He serves as the pilot to their ship as they get Suede and Lydia away from Thawne's grasp. He pilots the ship so they can save Bender from The Joker who nearly kills him while Discord, Phineas and Isabella take care of everything else. Jimmy then decides to do some inventing to combat the forming Legion with the help of his science savry friends though he does get annoyed by Discord, and is he mentioned by Rick as someone Rick geuniely respects and considers smart.

Jimmy finishes making the time machine with Rick and leads the group into planning their time machine together. When Rick is left in charge while Bender is away, alongside Morty, Discord, Suede, Rick, Twilight, Finn, Amanda and Colress Jimmy works on locating a vortex regulator for the group while Bender is out finding his past self. Jimmy leads the remaining members in their own mission to save his other friends from Eobard and Toffee who nearly kill Suede, Rick and Morty. Jimmy gets back to Bender, only to work against saving him when He gets arrested by Alchemy and get the teleportation stone with Skipper. He manages to acquire the teleportation stone with Skipper and this helps them get further to be ready to go ahead in time

He, Starfire and the rest of Bender's team join forces with Eddy and Mojo in dealing with the Legion under Joker's main commanders Dr. Weil and Terrance Lewis and trying to steal Joker's X Parasites as they are trying to bring back the parasites for the legion.

Bender recovers and see that Skipper, Starfire, Jorgen and Jimmy are still with him  gets communication from Phineas, Twilight, Discord and Anatauri about their strandness. They decide to make due with what they have. Jimmy holds up the amulet and knows that they are on the Netherlands path, when Jorgen asks how he knows that, Jimmy points out that back when they traveled here, Axel did tell the crew that Scorpion came from the Netherlands and considering how the multiverse changed up, It's the most considerable thing to do. While Jorgen and Jimmy are basically discussing this, Bender, Starfire and Skipper basically went ahead without them having them ask to wait up

Scorpion reads the amulet and translates that it leads to an ancient relic of the past with massive effect. This surprises them, and that's when Deathstroke and his allies show up as Scudsworth and Welton report this to Deathstroke. Bender, Skipper, Scorpion, Starfire, Jorgen and Jimmy are feel surrounded by the group.

Scorpion joins the 5 on pretenses of wanting to find what the amulet was referring and head to a graveyard and through digging they find what it happens to be. The Spear of Destiny which Scorpion refers them to when Dr.Alchemy shows with all Earth 2 Metahumans and all attack the group. Scorpion, Bender, Skipper, Starfire, Jorgen and Jimmy all manage to defeat them, Skipper and Bender are both tasered in place by Scott who arrives, wanting to take matters in his hand and then Dr.Alchemy leaves with him. Alchemy leaves more meta-humans for the other 4 to fight

Jimmy gets back to the team to report of Bender and Skipper's arrest and they are nearly killed by Uka Uka, Hunson takes his soul and kills him while bringing the team to his hideout. Unaware of Hunson Abadeer, he is told of their history before told by him and Alt Doof about them teaming up to fight Thawne. He is more or less goes on and off in finding the Spear of Destiny parts for the team where he takes part in finding the 3 and the 4th part to keep his resurrection a secret from the multiverse.

InFAMOUS: The Three Heroes (From Nothing To Something) 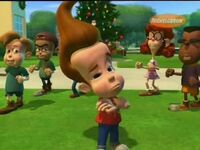 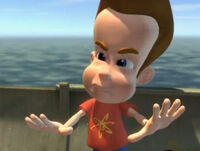 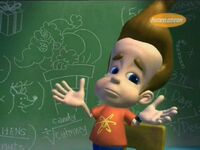 Jimmy Neutron with his Team/Allies, Twilight Sparkle and Delsin Rowe 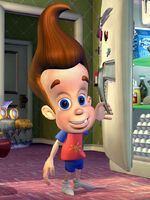 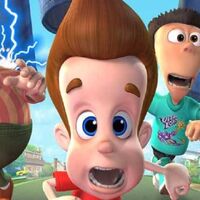 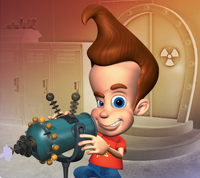 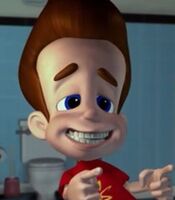