Legends of the Multi Universe Wiki
Register
Don't have an account?
Sign In
Advertisement
in: Characters, Heroes, Orange Haired Characters,
and 83 more

Hibiki Tachibana is the main heroine in Senki Zesshou Symphogear series. Hibiki is a schoolgirl who attends the same school as Tsubasa.

Hibiki has dark orange eyes with short cream colored hair fastened with two red clips on either side of her head. She is most often see wearing the uniform of Lydian Music Academy.

Hibiki has a scar on her chest in the shape of a 'forte' from when Kanade's Gungnir fragment pierced her chest on the day of the Zwei Wing Concert.

Hibiki is a kindhearted cheery person though a bit aloof sometimes. Her hobby is helping others and she has a liking to a lot of food.

Hibiki Tachibana made a debut as one of Yuinshiel Asteria's followers. Hibiki takes a responsibility to look after Symphogear Heroines and their friends to do a regular training. So that, she and the heroes must be prepared to fight against Gunther Prozen and his wicked men. 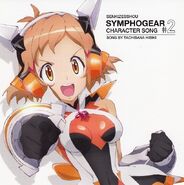 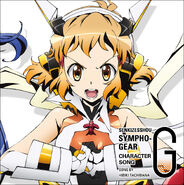 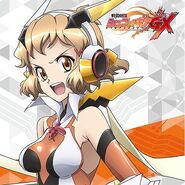 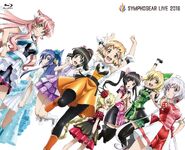 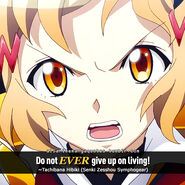 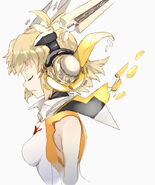 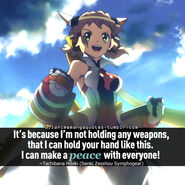