Legends of the Multi Universe Wiki
Register
Don't have an account?
Sign In
Advertisement
in: Characters, Heroes, Characters from the Yu-Gi-Oh! Universe,
and 15 more

Guardian Eatos is a female character and a heroine from Yu-Gi-Oh!. Her French and Italian names refer to her with the masculine forms of the words for "Guardian", even though there are feminine, game-compatible forms.

Eatos made a cameo appearance to rescue Leo Conrad and Sally Land from Gunther Prozen's minions. 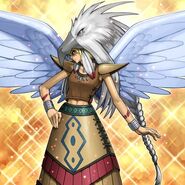