General Xaviax is an alien who defeated the Kamen Riders to conquer Ventara before turning his attention to conquer Earth with his monsters gathering humans to set up his master plan of abducting all humans on Earth to be his slaves in rebuilding his home world and the main antagonist of the TV show Kamen Rider: Dragon Knight.

Xaviax is what can be expected from a charismatic, genius, and manipulative mastermind. While he treated his foot soldiers and their monster commanders as expendable pawns and was not faltered by their loss due to their numbers, his Earth Rider pawns seemed to be very important pawns for him due to their abilities that exceeded his best monster commanders. He is adept in means to recruit and manipulate his pawns through things they cared about (such as loved ones and career for example) or anything they wished, but is not above blackmailing if such a tactic is deemed necessary. 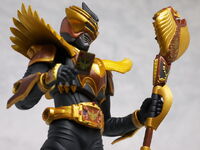 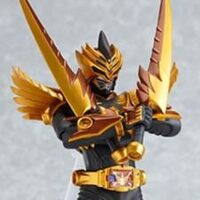 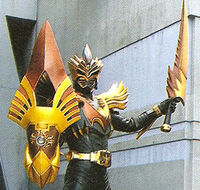 Kamen Rider Wrath's Sword and Guard Vent where he switches to a new fighting style of wielding a golden sword for offense and a large golden shield for defense.

Kamen Rider Wrath can teleport to leave a trail of golden feather's to distract and confuse an opponent, while Wrath make's an unexpected attack to the opponent. 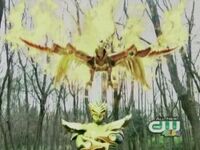 Kamen Rider Wrath uses the advent card to summon his advent beast Gold Phoenix a mechanical and magical Phoenix that he can use to attack with him or use the final vent.

Kamen Rider Wrath's Final Vent where his Gold Phoenix advent beast picks him up with its talons and then Gold Phoenix sets himself in flames onto his masters back as Kamen Rider Wrath's body is engulfed in a superheated fireball where he flys off forward down to headbutt into his flamed body to create a huge powerful explosion to finish his opponent off.

Kamen Rider Wrath Wielding his staff to strike his opponents.

Steal Vent is a card, Kamen Rider Wrath can use to magically teleport an item away from his opponent, right to his hand.

Kamen Rider Wrath uses the Time Vent card to reverse time and make it easier for him to counterattack against his opponents.

General Xaviax crushing someone with his telekinesis.

General Xaviax possessing Vic Frasier's body to use as a sacrificial lamb, so his final vent's recoil doesn't have an affect in injuring him, instead the body he possesses receives the injuries.
Add a photo to this gallery
Retrieved from "https://legendsofthemultiuniverse.fandom.com/wiki/General_Xaviax?oldid=715732"
Community content is available under CC-BY-SA unless otherwise noted.