Start a Wiki
Frieza (フリーザ, Furīza) was the prince and the emperor of the universe, who controlled his own imperial army and was feared for his ruthlessness and power. He was the descendant of Chilled, the second son of King Cold, the younger brother of Cooler, and the father of Ize. Frieza is the catalyst antagonist of the entire franchise, as it is his actions that led to Goku arriving on Earth.

He's been voiced by Linda Young and Chris Ayres.

Frieza appeared as a loyal member of the Shadow Force. He works with the rest of the villains.

After the death of Galvatron, Frieza took over as the leader of the Intergalactic Empire. During his terrible rule, he has killed his own father.

Frieza invades an Order of the Just outpost, forcing the Knights of the Just back into action.

In the original universe of Dragon Ball, Frieza was killed by Trunks when he tried to destroy the Earth and was sent to Hell. However, when the Deus.Ex.Machina Industries Empire managed to enter the Dragon Ball universe, they learned that before they invaded there was an Evil Empire that was exterminating and destroying planets to sell them for a high price, the Planet Trade Organization. Sir Isaac Ray Peram Westcott researched the Dragon Balls and active members of the Planet Trade Organization to revive their former leader in order to make him join the DEM Empire. Isaac could see utility to Frieza in his army. Frieza, then, was revived after the soldiers from the Deus.Ex.Machina and Planet Trade Organization had used the Dragon Balls from New Namek. However, Frieza refused to work for Westcott, as his pride did not allow such action and all he wanted at that time was to get revenge on Goku. Isaac then just decided to let Frieza and his army affiliate to DEM, which Frieza agreed to as long as they continue his reign of terror over the universe and he had a chance to take revenge on Goku. Frieza soon realized that the DEM was virtually the same as the organization he has, as they destroy planets and enslave races. After Isaac and Frieza had made a covenant, Frieza began to destroy planets neutrals or allied to the Resistance as well as races, galaxies, and planets allied to the Alliance of Freedom.

Later, the capital of the Empire of Frieza on Universe 8 was destroyed by heroes from the Alliance of Freedom. Frieza lost his wealth and the Empire he had after his death. He killed Captain Ginyu and all Ginyu Special Forces for not having protected his empire.

In Humanity's Strongest, Frieza enslaves Earth in look for the dragon ball. His rules and laws were cruel and unfriendly. Goku led a revolution against this and fought with Frieza. Aizen later interrupted and the three had a fight. Frieza tried to escape when he teleported to planet Namek. Frieza attempted to blow up Namek so he can torment Goku's friend Piccolo. In the end Frieza's ship was stolen by Goku and he was left to die in the explosion of the Namek. He later came back as a cyborg by King Cold and killed all of his elites. He tortured his father and brother before going to Earth where he meets the DEM and teamed up with them. He ends up betraying them and taking over the DEM as its dictator. With his power over the DEM, he killed Goku's wife and friend/rival. This caused Goku to go into Super Saiyan 3 and brutally beat down Frieza till he died. 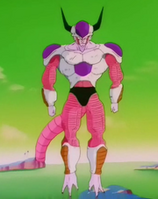 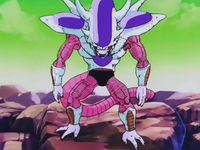 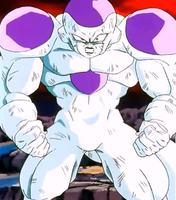 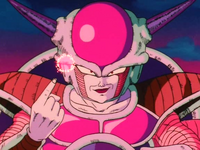 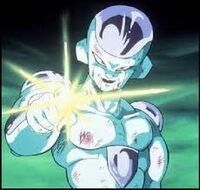 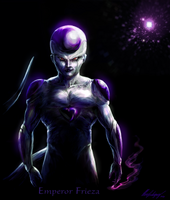 Add a photo to this gallery
Retrieved from "https://legendsofthemultiuniverse.fandom.com/wiki/Frieza?oldid=728594"
Community content is available under CC-BY-SA unless otherwise noted.