Fearow is a large bird Pokemon. It is the evolved form of Spearow. Fearow is large in size and can be quite powerful. Still, it's not one of the strongest Pokemon. Its large size, however, can serve as a great carrier for Pokemon trainers, enabling it to utilize the HM move Fly, which enables it to fly trainers to different towns that they have previously visited.

Its name is a combination of fear and sparrow. It may also come from feather and arrow.

Hawx evolved from a Spearow and was proven to be one of Akari's favorite flyers. It was no threat to be reckoned with, whether it'd be against other Pokémon, Trainers, or even Games as one of them featured the nefarious Fun House. Heck, Hawx couldn't get enough of ripping the scary clown User to shreds.

Captain Falcon owns a Fearow. He used it in his Gym Battles as a Gym Leader Representative of Saffron City.

Falco also went on to own a Fearow. He also owns a Spearow.

Fearow resides at Lon Lon Ranch after seven years, yet he was constantly abused by Mr. Ingo. Because of Link's valiance, he finally gathered and unleashed his fury, reducing the marauder into a permanent cripple. Malon took charge after that, and he decided to look over it. 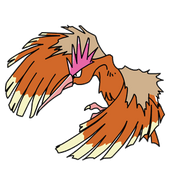 Who's that Pokemon? (Sword and Shield edition)

Fearow in the vengeance against Ingo

Fearow flies south to Lake Hylia with the other Pokémon

Fearow in M22
Add a photo to this gallery
Retrieved from "https://legendsofthemultiuniverse.fandom.com/wiki/Fearow?oldid=710336"
Community content is available under CC-BY-SA unless otherwise noted.