Legends of the Multi Universe Wiki
Register
Don't have an account?
Sign In
Advertisement
in: Characters, Characters from the Fairy Tail Universe, Humans,
and 37 more

Erza Scarlet is an S-class mage from the Guild Fairy Tail and also one of the main protagonists from the series.

She is voiced by Colleen Clinkenbeard

Beauty and the Miracle Elite

Erza Scarlet made first appearence as a member of the League of Extraordinary Swordsmen.

Phoenix Inc. caught all the league of extraordinary swordsmen, but not four of them. Oswald and others gave them a big surprise. Morpheus summoned Hal 9000 and completely captured them all.

Saito got pissed at everyone for accusing him all a time. He and Kirito begin an angry argument, so they decides to kill each other off. But, they've stopped by Erza and Oswald to confront them. He reprimands Saito and Kirito for their actions, but the situation is quickly dropped by the former in order to focus on escape plan

Legends of the Multi-Universe: Mageddon Trilogy

Erza grew up in Rosemary Village, the same place where Kagura and Simon lived as children. When Rosemary Village was attacked by a Zeref-following cult, Erza managed to save Kagura from capture by hiding her inside a crate, but got caught herself as a result. She was enslaved by the cult and forced to build the Tower of Heaven, a structure developed for the purpose of resurrecting the Dark Mage, Zeref. She was imprisoned together with several other slaves, most of them were children. Among these children were Jellal Fernandes, Shô, Simon, Wally Buchanan, and Millianna. While they were asking each other for their names, she said that her name was just "Erza", so Jellal decided to give her the surname "Scarlet" after her scarlet hair so they would never forget it. Despite the harsh conditions of her enslavement and labor, Erza became close friends with the other children. She also formed a strong bond with Rob, an elderly Mage from the Fairy Tail Guild, who taught her about Magic and his guild.

After washing up on the shores of Fiore, Erza made her way to and joined the Fairy Tail Guild. She habitually began to wear armor and acted distant from the other members. After Gray, who tried picking fights with the reclusive Erza, saw her crying by herself and questioned why, she began to open up to her guild mates more. Around this time, Fairy Tail's master Makarov brought Erza to see Porlyusica, who gave her an artificial eye to replace the one she lost. With her eye healed Erza shed tears of joy, which only came out of her real, left eye, though Erza didn't mind as she said she had already shed half of her tears and then following to the current Fairy Tail events on Tartarus, Oracion Seis, Edolas, Lubabby, Griemore Heart, Phantom Lord and many othe archs on FT Universe.

After the events of Alvarez Empire, the all dark and official guilds on Fairy Tail universe were teleported to Multi-Universe by the Reality Council in order to fight the Balam Alliance. Many countless villains and heroes were teleported to Multi-Universe but none of them know what happened. Erza, as the master of Fairy Tail, noticed cities near her location being attacked by some type of evil force. When she saw the city, the city was completely destroyed with many people dead. However, a battalion of the Sith Empire come and started to shot at the villains and heroes. After they defeated the battalion, the Reality Council told to all heroes and villains about their situation and what happened. Erza, after hearing these words, decided to help in that war, as well countless heroes, but some villains refused to fight and run for their lives and many other were just no interested. Erza and many of her friends fought Sith Empire forces, and the Balam Alliance knew that a new war was about to start, Erza and her friends fought villains and public villains for sometimes. At some point, Erza met Katarina Couteau, and many thought they were sisters when they joined Alliance of Freedom. 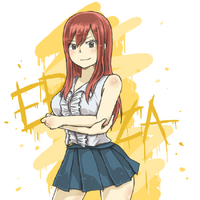 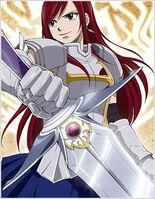 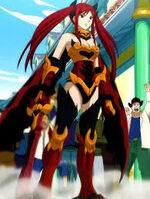 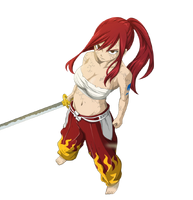 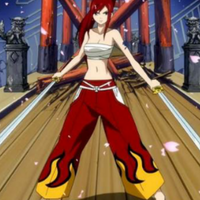