Start a Wiki
Devon Daniels is a character from Power Rangers Beast Morphers.

He is portrayed by Rorrie D. Travis.

Devon is the rebellious leader of the Beast Morphers, who is also the son of the Mayor of Coral Harbor. He sneaks into Grid Battleforce, knowing it has an advanced battle simulator. Before being caught, he noticed that Evox has intruded the GB systems, but the latter had proven to be undetectable. Failing to warn Commander Shaw, he is detained. When Evox makes himself known, creating copies of Blaze and Roxy, Devon escapes when his cell door malfunctions and saves Ravi from meeting the same fate as Blaze and Roxy. The fate of the real Blaze and Roxy forces Nate to morph Devon and Zoey into the Red and Yellow Rangers in their place, while Ravi kept his place as Blue Ranger. Due to being combined with Cheetah DNA, Devon was accepted by Commander Shaw as the Red Ranger.

This mode is powered by the Fury Cell, which Nate later discovers that it was slowly turning Devon evil. However, Devon snapped out of the cell's influences and shattered it, losing the ability to morph into Red Fury Mode in the process. Fury Mode has remained in disuse since then, possibly to be succeeded by Beast-X Mode, used by the first three Rangers.

Beast-X Mode is a power-up mode used by Devon, Ravi, and Zoey, by combining them with their Beast Bots.

With Beast-X Mode, Devon's Cheetah Speed is enhanced, allowing him the ability to teleport. This is useful in dodging attacks and attacking quicker. His finishing move is known as "Beast-X Cheetah Charge", where Devon projects a golden vortex of energy, surrounding him with data schematics, and charges into the vortex which changes him into a flaming red cheetah (similar in appearence with the Racer Zord's Cheetah Mode), and then ploughs through his foes with lethal force. 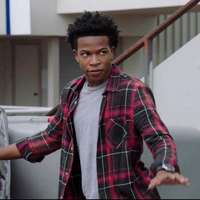 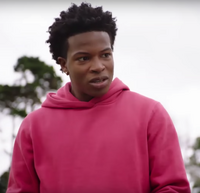 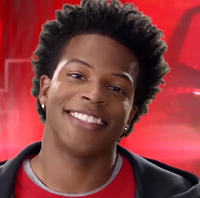 Devon held captive
Add a photo to this gallery
Retrieved from "https://legendsofthemultiuniverse.fandom.com/wiki/Devon_Daniels?oldid=701933"
Community content is available under CC-BY-SA unless otherwise noted.