Legends of the Multi Universe Wiki
Register
Don't have an account?
Sign In
Advertisement
in: Characters, Villains, Sadists,
and 45 more

Dennis the Hitman is a major antagonist in Spongebob SquarePants Movie.

Example: He has spiked boots, and nearly killed Spongebob and Patrick (before he turned dark side). Even worse, he's a complete monster.

He is truly one of the most evil and darkest Nickelodeon villains we've ever seen.

He joined Beelzeboss as a second in command and partners with him. He also is hired by The Joker to kill Bender and Skipper

Dennis is pulled out of timeline of Meister of War by The Joker. Joker hires Dennis to stalk and ultimately kill Bender and Skipper which he will first appear in Season 3 and be one of the main villains of that season.

Dennis makes his first appearance chasing Bender and Skipper by stopping at the gas station they were and once his hat was mocked, he rips there lips. Dennis then goes to a gun shop and gets loads of weapons and kills the owner. Lydia spied on this and Dennis tries to kill her with his guns before resuming the chase.

Dennis after chasing Lydia encounters Deathstroke and they have a brief talk. He goes to the Thug Tug and notes the two B Team heroes were here and the Thugs and King Shark pick a fight with Dennis. Dennis doesn't give a shit and uppercuts King Shark into the thug tug and then picks up his assault rifle and murders the thugs who try to jump Dennis. Dennis also is next seen in the area where Bender and Skipper were chased by a time wraith, Dennis grabs a skull after hitting a pile and crushes one while laughing. Dennis finally catches up with them stating that Dennis was sent to kill Bender and Skipper while engaging in banter a bit, before trapping the two  with a made trap and then Dennis gets his spiked up shoes to squash their insides while cackling like crazy when a boot crushes Dennis. He survives and then goes after Lydia again which stalls her from helping her friends, though Grovyle and Kyle manage to get the drop on Dennis by once again defeating him in a two on one with Grovyle leading. He resurfaces when Bender and the crew go to Slade's lair and him with Skipper meet Lydia and he is intent on killing all 3 of them. The three run from him only for Dennis to trap them on The Jolly Roger forcing the trio to work together to outwit and fight Dennis which results in him getting eaten by the crocodile

It turns out Dennis actually escaped the crocodile and killed it by punching again and again and even shooting it while he was in there. Dennis was found by The Federation and manages to find a location on Bender and Skipper and has Scott go there to taser them. Dennis betrays the Legion through this and kidnaps Joker's men on top of that proving Deathstroke's warning right. He is next seen as the warden to Bender and Skipper.

Dennis is now working with Alchemy and Scott who paid him more and Dennis tortures Joker's former teammates while trying to kill Bender and Skipper on several occasions to their fear and He mercilessly kills a lot of people for the joy of it. Dennis also tries to murder Team Arrow and Rick before Starfire saves the heroes from him and the Federarion. Dennis tries to kill them again, but Deathstroke stops him in his place and kills him.

Dennis was one of Baraggan's associates from Bikini Bottom. He was determined to kill Spongebob for humiliating him.

He was swallowed by Godzilla.

Dennis managed to escape being killed, unknown to the other heroes or villains and made an alias to act without detection. Because he wasn't affected by the Spear of Destiny, he remembers the old time line like Lydia, Lincoin, Ford, Bender, SKipper and Deathstroke. He joins forces with N.Tropy for his own reasons. 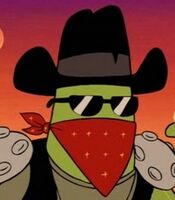 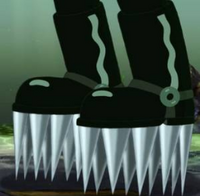 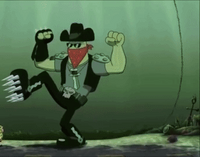