Legends of the Multi Universe Wiki
Register
Don't have an account?
Sign In
Advertisement
in: Characters favorite by Darthnecrozma666, Characters, Heroes,
and 18 more

Carl Fredricksen is the protagonist in Up. He also appeared in Dug's Special Mission as a supporting character and in George and A.J. as a minor character.

Carl has the typical stubborn character of a man his age but deep down he's a kind person, but has his limits in patience and temper. He found Russell, Dug, and Kevin to be annoyances and obstructions in his goal to fulfill Ellie's dream of moving their home to Paradise Falls, but after he read her last message to him, he did what was right and saved Russell and Kevin, and accepted Dug as his dog.

When he lost his and Ellie's house, he was saddened but realized Ellie would have done the same, stating "It's just a house".

Carl vouched for Russell at his ceremony and gave the young scout the very same soda bottle cap that Ellie gave him the day they met, having come to love Russell as the son, or perhaps grandson he never had.

Carl Fredricksen made a minor first appearance in the prison-torture room. There, he was shot dead by the hands of Milinda Brantini. His last words were "Please, spare me! No!!". 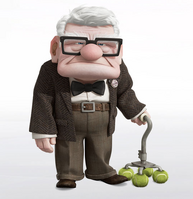