Legends of the Multi Universe Wiki
Register
Don't have an account?
Sign In
Advertisement
in: Characters from the Gundam universe, Characters, Heroes,
and 24 more

Atra Mixta (アトラ・ミクスタ Atora Mikusuta?) is a character that appears in the Mobile Suit Gundam IRON-BLOODED ORPHANS television series. She is friends with the CGS boys and has a crush on Mikazuki Augus.

Unlike most children in Chryse, Atra has learned how to read and write. She was taught how to do so by Haba.

Due to her job making deliveries to CGS, she also learned to drive at a very young age.

Atra is one of the allies of New Tekkadan led by Marika Kato. Kudelia, and Atra met the people of Mars, along with Symphogear heroines and their friends. After the meeting was done, he and the rest of our heroes join the people of Tekkadan with their dangerous adventures.

After arrival on earth is done, he, Kudelia, and Atra decided to part ways with the heroes. When he, Kudelia, and Atra were ambushed by Mikie Okamine for the first time. They survived the attacks and ambushes. Fled into hiding, Kenzo decided to argue with Kudelia and Atra. However, the three were interrupted by Mikie Okamine who had overheard everything and has decided that Kudelia Aina Bernstein is indeed an idiot.

Atra acted as a soldier to Hevenburg led by Captain Harlock. She and the heroes must fight back against the Great New Empire. She and Kudelia were completely ambushed by Bio Tyranno. 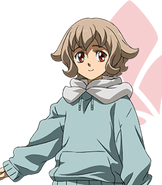