Angry Video Game Nerd (Formerly Angry Nintendo Nerd) is the main character of the AVGN series. If Nostalgia Critic is the ultimate critic of movies then Angry Video Game Nerd is this for video games. He uses loads of bad language to the point where they are catchphrases.

Biggest Strength: His temper and his many choice of weaponry

Biggest Weakness: The E.T. Game (at least until his movie)

Quote: He has many quotes usually swearing or saying things with shit

The B Team Storyline

His world had something happen to it and AVGN wanted to keep his world safe so he was blackmailed and manipulated by Albert Wesker to kill the Nostalgia Critic. Wanting to save his home world, Nerd accepted and decided to kill Nostalgia Critic. However at the last second, he held back realizing he couldn't just kill him as without Critic who else would he have to rival with. Wesker then destroyed his home world with Obroous and then framed the Nerd for killing the Critic which got him arrested.

Angry Video Game Nerd will make his debut in this story and he will be aiding the heroes against the Dystopia League and the Sigma Organization.

He was arrested by Carmelita Fox as he was framed by some party and now Carmelita wants the B Crew to see him. Bender and the crew meet the Nerd and explains that he is indeed innocent of the crime stated that he did and he decides to help the team against Discord in order to atone. Bender wanting to take action now deciding to potentially foolishly break him out.

He is broken out of jail by Bender and his 7 friends Sari, Marceline, Heloise, Skipper, King Julian, Django and Finn. He then joins the team  true to his word. Angry Video Game Nerd then infiltrates a castle and destroys the Spider bot created by the Dystopia League. He gets his injuries healed by House as he did take some damage during his mission. The Nerd participates in killing Mildew and he delivers the killing blow by shooting Mildew in the head with a shotgun.

The Nerd gets separated from his pals through Pitch's attack but with the help of Jack Frost he finds them. He ambushes Obadiah Stane and MOM through a sneak attack and he nearly kills MOM but gives her to Carmelita. After this he and Jack (have became good friends) Get the W.H.O.O.P girls released from jail and he destroys the files on him and his friends at Interpol.

He sometime got to Orlando, Florida with Axl, Alie and Jack Frost. He saw Bender, Skipper, Heloise, Phineas, Isabella and Axel and called them that night. The four joined the party and then Axl saw something odd and went after it. It Was E. Aster Bunnymund who was mad at Jack for something that happened decades ago. However this was for a different matter and he with the other 9 got placed in a sack. When there, Angry Video Game Nerd questions why they're here and it's revealed he is on the naughty list and holds a record with Bender, Skipper and Jack Frost.

During the ceremony that North as they are guardians, Nerd shoots the ceiling like Bender did to stop the music. When Bender wants to talk with Zordon, Nerd contacts the others about the circumstances. As of them arriving at the Channel Awesome universe he discusses about his involvement with the Critic. He also discusses Wesker and his involvement with Nerd. When Jack hits the Nostalgia Chick with ice by accident, Nerd asks her if she knows where Nostalgia Critic since they may need his help. Chick doesn't know where he is, but decides to help them anyway.

He is the sixth character to show as dress as Conan. He asks the others what is best in life and Jack asks just that. Heloise and Bender both think the costume is cool, He is disgusted at Axel's gag crotch like the other boys. He arrives in Equestria and with Axel and Axl he finds Saix and calls him a coward for deciding to escape. When Isabella asks about Model W, he answers with something that must be destroyed.

When Jack tells the team about his idea with Model A, AVGN wonders how it\s supposed to make sense. When hearing of the good news, he has even more good news as Mojo and Luthor have completed the Model W tracking device. AVGN acquires the third Model A fragment with his friends and battles Shen to make sure they can out safe. When they were saved by Gohan and Orion, he wonders how the fuck they were where he and his pals were. Nerd with the others meet Bauer and they all work to undermine the Dredd.

He personally fights Rico Dredd and despite the hard fight he wins and throws Dredd out the window. Afterwards he joins the others on the ship and when Orion questions Skipper's small size he seems to believe small size works well. He is next seen with the others being separated and he goes with Chick, Axel and Jack Frost. AVGN works with the heroes to attack Apokolips to get the third part of Model F. When he overhears of Alie trying to propose with Axl, he agrees with Jack Bauer that it;s unusual that she's asking him. He also agrees with Bauer again when Khan manages to find them and get a lock on them. When Khan threatens them, AVGN refuses to give into his demands considering they worked hard to find the pieces. AVGN enters the Aztec Complex and sees Nostalgia Critic brainwashed by Malefor to be N.Bison. Nerd tries to snap sense into him but N.Bison doesn't listen which Axl pulls him out to do later. As a result he helps Jack Bauer attack Aztec and he runs into the Entity which he tries to kill, though it resists everything he throws.

AVGN accompanies in the ship of Captain Hook with Bender and the others, as well as Slade. AVGN decides to investigate the sea with Axel but not through swimming. AVGN works with Axel and the other villains in the sub as the others are investigating the sea. When Captain Hook gets mad about Heloise turning it into a sub, AVGN gives Heloise credit for thinking up a way to operate subtly. He doesn't seem to annoyed with Heloise and Isabella being turned into mermaids, when Mozenrath and HIM fight the Nerd has them do what they want. AVGN and Axel see the others comeback from their missions and they decide to join Insano and Lex. The two learn to their shock that not only Model W is Dr. Weil, but Malefor's forces have destroyed the Channel Awesome universe.

AVGN is asked by Skipper about how he intends to defeat the Entity and save the Critic. He is unsure but he is working with the Nostalgia Chick to do this. Nerd does a scan of the area and informs the crew that Giovanni and Ozai have set up 4 fractions in the mountains. AVGN goes on a mission with Axel to get the Critic, and they manage to bring him in where he and the Chick put their plan to work.  He and the Chick catch N. Bison and are out to beat sense into him. He and Nostalgia Critic try to extort info out of Jackal and Hyena and not to lie. Angry Video Game Nerd and Nostalgia Critic team up to defeat Malefor, Darkseid and Dr. Weil. Angry Video Game Nerd decides to get his guns ready for Charles Logan, the man who is Bauer's nemesis. When they see Logan's element bombs, AVGN deducts that Charles Logan was given them, it's not likely anyone can make a bomb out of elements except if they invented explosives to work as elementals. During the chase Nostalgia Critic freaks out and Nerd tries to calm him down as he's going out of control. AVGN, Marie and Phantom R act as mission control for Critic and help him as he goes looking for the mutated Addler.

Angry Video Game Nerd and crew land on Apokolips where he fights for Bender against the forces of Darkseid. He and the crew take it on The Entity hoping to defeat it. While they don't succeed, they do diminish it and before it gets them, Linkara saves them and stops it. AVGN then helps Jack Bauer get rid of Logan by acting as backup alongside Marceline. AVGN tracks Hazama to Olympicus and gives chase to him and helps his friends fight Hazama. 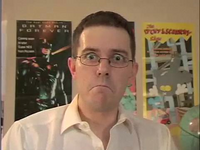 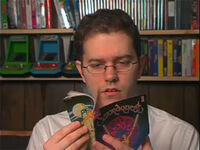 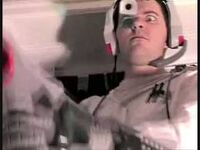 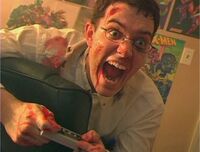 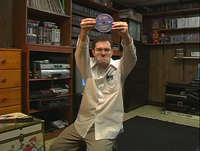 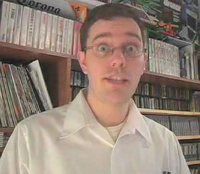 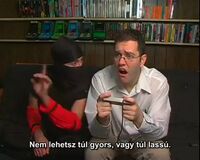 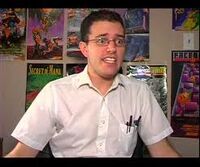 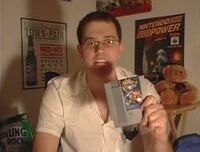 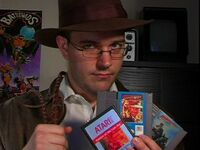 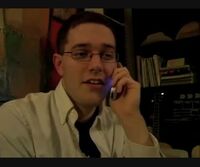 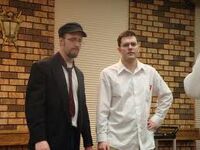 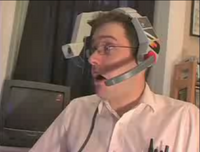 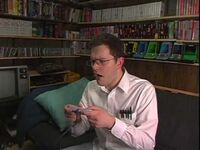 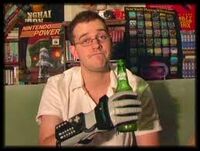 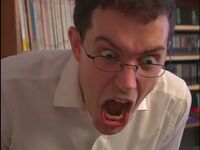 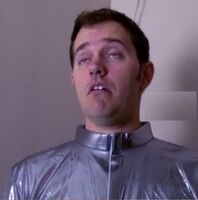 Add a photo to this gallery
Retrieved from "https://legendsofthemultiuniverse.fandom.com/wiki/Angry_Video_Game_Nerd?oldid=733986"
Community content is available under CC-BY-SA unless otherwise noted.