Legends of the Multi Universe Wiki
Register
Don't have an account?
Sign In
Advertisement
in: Characters that hail from the Digimon Universe, Characters, Heroes,
and 24 more

Alice McCoy (アリス・マッコイ Arisu Makkoi?) is a character who first appears in episode 44 of Digimon Tamers. She is voiced by Philece Sampler.

Alice is a young girl with pale skin, blue eyes and short blonde hair, which is worn in pigtails with black hair ribbons. She dresses in the gothic lolita fashion style, wearing a black dress with long sleeves, and many dark purple crosses on it, black stockings and shoes, and a metallic crucifix on her neck.

In a photograph, she ties her hair with blue ribbons, and wears a gray T-shirt with black raglan sleeves, a navy jeans skirt held by a brown belt with a metallic buckle, and either black pants or stockings.

She was with Futaba when Gjallarhorn attacks CGS's headquarters in an attempt to assassinate Futaba Ichinose. Their attempts were thwarted due to actions of CGS's Third Group.

After the deaths of Kain and Thornheart, she and the heroes continued to live a life with her friends in Mars. Suddenly, she and the people were visited by the Symphogear heroines and their friends for the first time. During the meeting, she and the gang decided to discuss about the future deaths of Rustal Elion and the rest of Lord Prozen's minions as well.

After the meeting was finished, she and the heroes left their homeplanet Mars, thus leaving their families and their homes behind. While continuing to escort Futaba Ichinose and Chitose Karasuma, she and her friends were confronted by the people of the Knights of Gjallarhorn.

When the Bruters launched attack with their first attempts. Sento and his friends decided to rescue Hiroki Nagase and the rest of his brotherhood friends of Hokuto Three Crows under the command of Marika Kato and her followers. Following the successful rescue, Milinda Brantini and Sento Kiryu decided to discipline the rescued people a peaceful lesson.

After the defeats of the Bruters and the death of Yan Baihu, she and the heroes continued their journey to earth to recruit Luigi Latorre, Leo Conrad and Sally Land when they heard the ideal news that Yugo Ogami and Alice Tsukagami were kidnapped by Gjallarhorn. So, Alice must keep the heroes safe no matter the cost. At night, Alice must talk to Futaba Ichinose that if she becomes the revolutionary heroine of hope. Futaba must bring peace between many species in the Multi-Universe. In the next morning, Alice woke her up. However, she was shocked Futaba went outside without the permission from Marika Kato and her followers. When the explosion was unleashed. Alice herself was injured. In her last act of will, she sacrificed herself to save Futaba from letting herself be shot by Gjallarhorn's soldiers. Suddenly, she took a deadly shot from the villains. Futaba was shocked that Alice McCoy was dead. 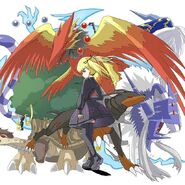 Alice and the Digimon Sovereigns
Community content is available under CC-BY-SA unless otherwise noted.
Advertisement