Legends of the Multi Universe Wiki
Register
Don't have an account?
Sign In
Advertisement
in: Characters, Heroes, Humans,
and 27 more

She is voiced by Saori Hayami.

Aila is a seemingly quiet individual, often speaking with a lack of emotion and responding with the bare minimum amount of words. However, this seems to be a front, as she has been shown to be able to express emotions, as shown in her encounter with Reiji. Like Reiji, she seems to have a enormous appetite, buying all the foods that Reiji was planning to buy. Aila's dislike of Gunpla Battle stemmed from her use of the Embody System and lamenting how everyone, especially Reiji, would lose upon fighting her. However, during her battle with Gawain, she smirked with satisfaction after utterly defeating his JDG-009X Devil Gundam. She would later then build a SD Command Gundam with Takeshi Iori's guidance alongside Reiji and pitted it against his, and would end up greatly enjoying her fight with him. After being freed from the influence of the Embody System, she became far more outspoken and involved in her fight with Reiji, quickly warming up to him and Gunpla Battle. This reaches a zenith where Aila asks China to help her construct a custom Gunpla, hoping to spend more time with Reiji as well as desiring a rematch with him.

Aila made a debut as one of Wataru Kurenai's followers. She is now working with Wataru and his followers. Ever since than she has served as one of Aila's most skilled pilots, and one of his wives, alongside her partner Leena, also a follower of Wataru. When the Transylvanian Business enters into conflict with Tekkadan, Aila along with Leena met them in battle until a ceasefire was agreed upon. After the agreement was successful, she and the heroes combat against the The Bruters.

After the defeat of The Bruters and the death of Yan Baihu, she and the heroes continued their journey to earth.

A system specifically designed for Aila that is embedded into her control suit. When utilized passively, it links with Aila's brainwave and visualize the particles on her head mounted display, thus enhancing her ability to sense the flow of Plavsky particles and results in better prediction of opponent's move. When switched to full output by Barthes (Aila's manager), it causes the red markings on the Qubeley's body to glow, enhancing its performance to inhuman height and causing severe mental strain to the pilot. When fully under the Embody System's control, Aila continues attacking even after the opponent has already been defeated. While the system actually violates tournament rules, it won't respond to anyone else wearing it and thus can be passed off as cosplay. 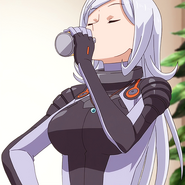 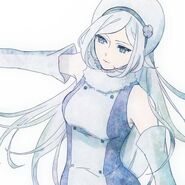